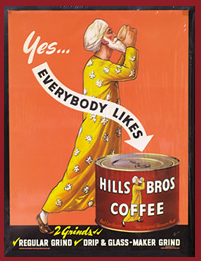 Thanks to the several colleagues who pointed me toward the article America's Arabian 'Cuppa Joe' in the current issue of Saudi Aramco World. (This magazine is free online and in print by free subscription; it is a wonderful tool for teachers.)

Author Jonathan Friedlander mined his vast collection of orientalist pop-culture artifacts to illustrate a brief history of the use of "Arabic" imagery in the marketing of coffee in the United States, particularly in the decades surrounding the turn of the 19th century.

The article is a good introduction to the concept of "Orientalism," which was coined by Edward Said in his book of the same title. Said's 1978 work is said to have signaled the dawn of post-colonialism in humanities and social sciences. Learn more about orientalism from Said's book, Muslim Answers, PoCoWeb,  Danielle Sered at Emory, or Jim Dexheimer at Western Michigan.

Friedlander's story includes a brief history of the expansion of the coffee trade in the United States, particularly in the western part of the country. He points out that most of the actual coffee came from Latin America, but most of the imagery came from the Near East, and helped to perpetuate a number of confused stereotypes of the region. Arab (or, more often, faux-Arab) images adorned the coffee tins and advertisements of Hills Brothers (whose San Francisco headquarters sports a statue of the "Arab gentleman," even to this day!

The messages were not limited to marketing and packaging, however: Arbuckle Coffee included trading cards with the coffee, in series that sometimes included 50 or more cards related to a single them. As Friedlander points out, some of these cards address Arabia directly and contribute to the them of orientalism that he describes. In reviewing some of the cards described by collector Jeffrey Buck, I find that the cards capture many facets -- often unflattering -- of the conventional wisdom of Middle America in the Victorian Era.

Friedlander concludes his essay by explaining how exoticism continues to sell coffee, as with Arabian Mocha Timor from Starbucks. As he indicates, words are now much more important than images in these messages, but they are present, particularly in the marketing of coffee from Yemen or nearby locations.

Posted by James Hayes-Bohanan at 3:32 PM