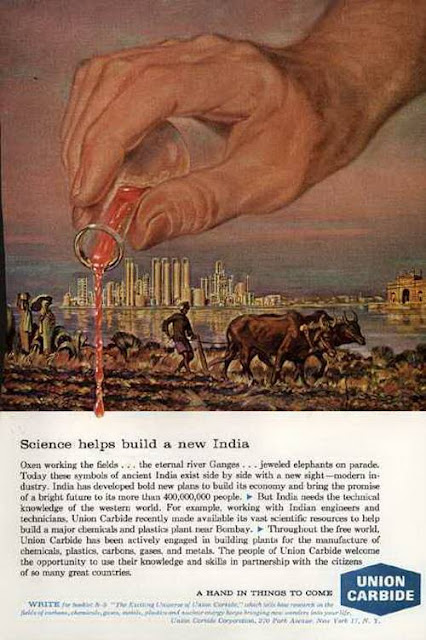 The first time I saw this image -- as a poster in my graduate advisor's office -- I assumed that it was some sort of elaborate political cartoon, drawn up following the Bhopal disaster as a dark parody of corporate arrogance. I was mistaken, however. This was actual corporate arrogance. It predates the death of thousands -- nobody knows for certain how many -- during a 1984 overnight gas leak in Bhopal, Madya Pradesh, in Central India.

I recently learned that this trumpeting of the needed "technical knowledge of the western world" was replicated in a series of ads that the "Today's Inspiration" blog describes as the "Hand o' God" series -- ads of breath-taking arrogance that could only have been made in the 1950s: an age of paternalism and confidence in technology that came after the Second World War (victory through technology) and before Silent Spring and Love Canal (extinctions and death through technology).

Protests against Union Carbide have now gone on longer than most of my university students have been alive, and the company continues to defend its response.

From my own kid -- currently an art student -- I learned of a very unusual artistic disruption related to the disaster and to the failure to take responsibility for it. In 2004, the BBC aired an interview in recognition of the 20th anniversary of the leak, in which an executive of Dow (the corporate successor of Union Carbide) appeared finally to take responsibility for the leak and to promise appropriate levels of financial compensation to victims and families.

The interview, it turned out, was a hoax perpetrated by an performance-artist duo known as the Yes Men. The escapade is featured on the online Museum of Hoaxes and some of its ethical implications are discussed by journalist Adela Kim in a 2014 Harvard Crimson article. The incident is also part of the 2009 documentary The Yes Men Fix the World, available from Netflix-DVD.

Posted by James Hayes-Bohanan at 11:53 PM