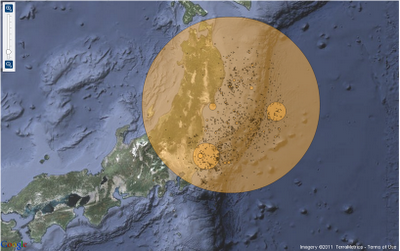 Japan is situated at the convergence of three major tectonic plates, which created the islands themselves and has made Japan and its people accustomed to earthquakes. In fact, Japan is among the countries of the world best prepared for both earthquakes and tsunamis, making the devastation of the 9.0 quake on March 11 all the more shocking. Japan is, of course, also highly dependent on nuclear power for its energy needs, and the unexpected destruction of the Fukushima Daiichi has received much of the worldwide attention in the wake of the disaster.

The New York Times has created a series of interactive maps that include the radiation effects but also remind readers of many other important dimensions of this tragedy. In addition to radiation levels, the maps show where buildings have been destroyed and lives lost, and that the spatial distribution of casualties differs from that of property damage. Another map includes links to selected photographs of the disasters and recovery. Finally, the map of seismic activity (screenshot above) shows the great number of worrisome aftershocks and illustrates the logarithmic nature of the Richter Scale.

Most of the island of Honshu is is in a climatic zone roughly comparable to that of the mid-Atlantic of the United States. This means that people displaced from their homes face early-spring weather conditions that are cold and uncomfortable, even if not life-threatening. See the Sendai forecast for an idea of current conditions, particularly at night.

(See my earlier post on Japan's Global Links for more thoughts on the geographic implications of the March 11 disaster.)