At Casa Hayes-Boh, if someone is thanked for a meal, the "you're welcome" is followed by "Thank the Farmers!" In fact, when the giant coffee cups at a favorite bookstore/cafe inspired us to commission our own, we asked the artists at Just Claying Around to include the phrase on the cup we use as a planter in our living room. (So far, our dream of growing coffee has not been realized.) I also use the image in all of my coffee presentations, and we apply the phrase to food from the many other farmers upon whom we rely daily. 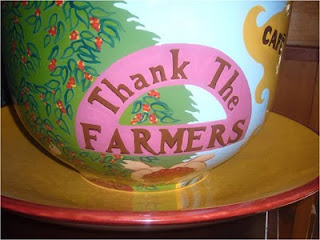 This week, though, the phrase has been shortened by one letter, to "Thank the Farmer!" One of the great problems in the conventional coffee industry is that producers are separated from consumers by many layers of middlemen (and they are mostly men, often called coyotes, and with good reason). In addition to the interference of layers, the connections are blurred because coffees are usually blended from all over the world to get a consistent flavor year to year. Fair Trade reduces the layers, increases transparency, and brings consumers and producers closer together.

CoffeeCSA is a company that goes even farther than fair trade in vertical integration -- the farmers own the entire business! Using the model of Community Supported Agriculture, customers are able to subscribe to the company's production, receiving coffee directly from an individual farmer each month. We have enjoyed supporting (and being sustained by) a local farm under a similar model for a few years, and we are always looking for new coffees, so I decided to give it a try. 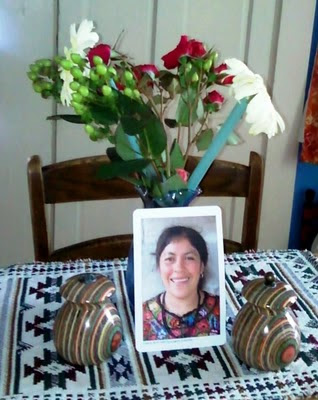 Somehow, it was from the second shipment that I became deeply aware of the difference in the geographic connections. Even most Fair Trade coffee is blended from many regions; even "Single Origin" coffee is blended from the farmers in a given area. The only coffee I routinely purchase from a single farm is from Selva Negra -- one of my favorites, but still at an estate scale. The coffee I am drinking as I write this is from a single, small farm in southwest Guatemala. And the farmer has a name: Catarina. So while we have this coffee in the house, her photo is on our table to remind us of her contribution to our far-too-comfortable life, and of the millions of other individuals who work to produce the coffee, cacao, tea, and other crops we enjoy.

So for now, the phrase is: "Thank Catarina!"

Posted by James Hayes-Bohanan at 9:43 AM