Tuesday, while preparing for our daughter's move to her new school, we found a nifty café in the vicinity. Technically, I suppose, it is not a café, but it includes many of the key elements, especially decent coffee. 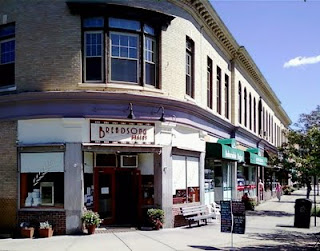 First, the New Breadsong Corner Bakery has decent coffee. Given that this was a summer visit, I appreciated the bakery's use of coffee ice cubes in the iced coffee. This reduces the need to brew extra-strong coffee and ensures that melting ice will not dilute the coffee. Given the good flavor and the care that went into this preparation, I was disappointed that the staff -- at least the staff present -- did not know anything about the coffee itself, other than a vague notion that it is "strong." So, decent but not excellent, and with no clear connection back to the farmers.

Second, though, the presence of highly decent coffee is a bonus when the main business is the bakery, and the bakery is so wonderful. We exercised restraint -- since we were on our way to get yogurt -- but the entire case looked scrumptious, as online reviews verify. We decided to share a delicious pumpkin muffin, complete with pumpkin seeds on top. Perfect for a light snack for two. It is not all about decadence, though: plenty of healthy, hearty loafs are offered as well -- the background on the bakery web page hints at the bounty of goodness. 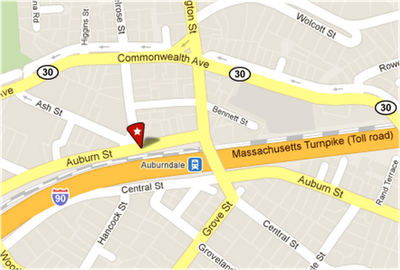 Third, this location is quite an amazing combination of a good site and a good situation.

The situation has a number of advantages: the shop is on a corner, easily visible from several directions, with plenty of on-street parking, both free and metered. It is surrounded by walkable residential streets, so that hundreds of potential customers are within a convenient distance. And as the map above (available through the review already mentioned) makes clear, this charming neighborhood is accessible to city, state, and federal roadways -- and best of all -- a commuter-rail station. 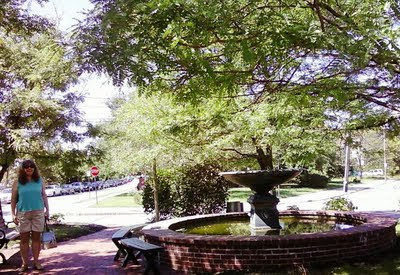 The site leads to my use of the word tableau, in the sense of "a picturesque grouping of persons or objects; a striking scene." That is to say, not only is the bakery situated in a way that conveys several advantages, the place of which it is an integral part has a number of advantages. The building that houses the bakery is a nicely maintained example of mid-century mixed use, with apartments above and retail or offices below. Such developments -- long made impossible by zoning -- are making a comeback as an antidote to sprawl. The center of our tableau, as we enjoyed the aforementioned muffin and coffee, was a park in the center of a rotary. Such public spaces are what make civilization so appealing! On our other side, completing the tableau, is the Auburndale Community Library, whose interesting tale Pam will be sharing on her own "liberry" blog. As if on queue to tie the moment together, a woman walked by hand-in-hand with a young girl of six or so, gleeful about going to the library and sending us down Memory Lane to many similar outings closer to home. 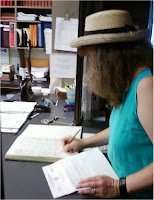 And the library connection brings me to my use of the word timely. We made these discoveries just hours after my favorite librarian was sworn in as a trustee of the Bridgewater Public Library. It would have been even more timely had power outages caused by Tropical Storm Irene not led to the postponement of her inaugural meeting.

The BPL has been through some very rough times, often blamed on the recession but more accurately blamed on voters who did not understand the importance of community resources of this kind. The recession, in fact, has made some "rugged individualists" a bit more aware of the value of cooperation; as often happens in a recession, library budgets are cut just as people need to make more use of libraries.

Pam joins a remarkable triad that has kept our library going -- the friends organization that raises funds and provides a lot of voluntary effort, the trustees who do the detailed planning and make the tough decisions that have brought the library back from the brink, and -- most of all -- the library employees who have shouldered the burdens of repeated cuts with amazing grace and dedication to their public mission.

Incidentally, I encourage those in and near Bridgewater to support the library -- and coffee and cacao farmers -- by ordering coffee and cocoa through its ongoing Cuppa Joe fundraiser. I first learned about my friend Dean Cycon and Deans Beans Coffee from a similar fundraiser at the M.N. Spear Memorial Library in Shutesbury. This is a classic win-win-win program: good coffee and cocoa, good treatment of the land and farmers, and good money for the libraries! I am delighted that the Friends of the BPL volunteers keep this program going.

Posted by James Hayes-Bohanan at 7:17 AM