Politicians who claim to know and care about the original intentions of the Founding Fathers (aka the white guys who wrote the US Constitution) seem to care little about the purpose of Article 1. At the very heart of their framework for the new nation is the creation of the Bureau of the Census, whose purpose would be to ensure that Congressional representation would remain proportional to population. (Of course, the same article counted slaves as 3/5 of a person each, so I am not among those who view their work as anything but a pragmatic series of compromises.)

As I wrote in my Article One post last December, it took only two electoral cycles for politicians -- beginning with Elbridge Gerry in Massachusetts -- to subvert the Article's intent. The term "gerrymandering" commemorates the salamander shape of the district he created on the North Shore.

Elkana Tisdale's cartoon did not shame the pols of his day, and in fact politicians continue to defy logic and court scorn and ridicule in their efforts to choose voters, rather than be chosen by them. Although this is a bipartisan activity, as I mention in the above-cited article, the neologism "Perrymander" captures the audacious efforts of Texas Republicans, led by their latest presidential hopeful, Gov. Rick Perry.

Even some of the governor's allies are now concerned, however, that the Legislature's current proposal might stretch even the most hallucinogenic interpretation of "compact and contiguous." Allies such as George Will extol Perry's personal commitment to racial fairness, and this might even be the case. His partisanship seems to be an even higher value, though, and a congressional map that would deliver 26 of 36 seats to his party raises serious concerns about disenfranchising voters along lines of race and ethnicity. Writing in National Journal, David Wasserman examines this overreach in some detail, and describes a more balanced map that might be imposed by the courts. 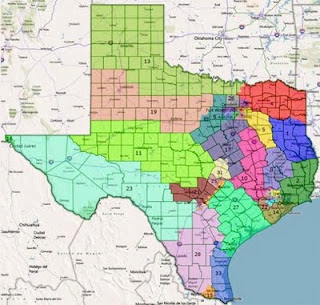 Posted by James Hayes-Bohanan at 2:31 PM