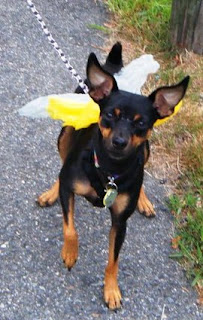 We might need to rename the family dog. Perry was named, at our daughter's suggestion, for Perry the Platypus, who is some sort of egg-laying mammalian secret agent on something called Phineas and Ferb. (She is not, by the way, named for Commodore Perry, about whom I wrote an encyclopedia article a number of years ago.)

We got the dog last year, and were excited to see bumper stickers with her name shortly thereafter. We even picked one up, thinking it would be cute on her dog box. Then we learned more about Cape Cod politician Jeff Perry, whose stickers they were. In a right-leaning year, he lost his bid for the U.S. House, largely because of his role -- as a police supervisor -- in allowing strip-searches of teenage girls. He then went on to fill a vastly overpaid patronage job, in open mockery of the fiscal conservatism he had espoused in the campaign.

Just as our local Perry was fading from the headlines, an even scarier Perry is popping up all over. Texas Governor Rick Perry is not scary in the creepy way that Jeff Perry is, but he is all the scarier because of his widespread popularity among vote-before-you-think Tea Partiers and the slim but real possibility that he could become president of the world's most powerful (for now) nation.

The first -- well, only -- time I met Rick Perry, I liked him. It was about 15 years ago, when I worked in specialty food in South Texas and he was the Texas Secretary of Agriculture. As Dale McFeatters has recently written, nobody can work a room like Perry. He remains unfairly handsome, and I am sure he is as likable in person now as he was when I met him in the 1990s. In fact, I still sometimes use a conversational gambit I learned from him. In getting to know people from all walks of life and varied interests, the agriculture secretary had a habit of asking, "Where did you go to school?" This was a good opening for conversation with someone with any level of education, and could lead the conversation toward childhood memories, Texas football, or really anywhere.

Anywhere but the subject of science, apparently. The governor recently underwent a stem-cell procedure that cannot even be described as "experimental," apparently because ideology is more important to him than science. It seems an almost inevitable error for someone who considers the theory underlying genetics to be a matter of opinion. A governor who will consign his own body to medical quackery is frightening as a president in a time when scientists need to be consulted, not scorned.

More specifically, Perry asserts that scientists fabricated climate change in order to collect grant money. Ignoring the billions and trillions made by the deniers of climate change, he castigates those who earn thousands or millions studying the problem. Here he parts company with other Republican governors who recognize the threat climate change poses to their state economies. He is even at odds with his own past as Texas director of the 1988 presidential campaign for Al Gore, whose position on anthropogenic climate change was already well known.

The problem with the ad hominen approach Perry is taking is that it distracts him from seriously exploring the evidence. Washington already is moving too slowly on climate change, though both active-duty and retired military officials are now see climate change as a threat multiplier and a threat to military infrastructure. Perry is not fit to be Commander-in-Chief in such circumstances.

Because of economic fears, some might wish to set all this aside, because Gov. Perry fixed the Texas economy, or so he claims. In his recent adulatory essay, George Will repeats the cherry-picked statistics about job creation in Texas. Renée Loth sets the record straight. The jobs are almost entirely low-wage, giving Texas the largest population of working poor. The eviscerated social safety net leaves "pro-family" Texas providing the lowest standard of care for expectant mothers. And most of the economic growth that has occurred comes from two sources, one of which Perry actually worked against: oil revenues and Bush-Obama stimulus money.

Despite of -- or perhaps because of -- his earlier life as a Democrat, Perry has become such a shameless partisan that the abuse of his redistricting authority has resulted in the coining of a new word, which is explored in my Perrymander article (with thanks to Perrymander.com).

Back to that rascally min-pin of ours: her name will be Perry, though we won't be getting any bumper stickers for her box any time soon.

Posted by James Hayes-Bohanan at 10:56 AM