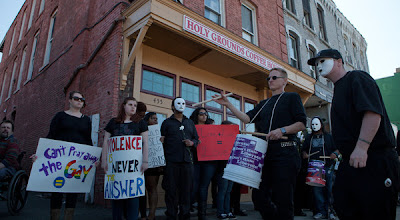 Over the past decade, I have learned a lot about and have come to love coffee shops. They are places to gather, build community, share good food and of course drink coffee (or tea). They can even be the starting places for social movements, as they have most recently in Egypt and elsewhere in the Arab world. At the local level, coffee shops can help to educate consumers about the people and places behind their favorite beverage -- as I have proposed for my own campus.

I recently learned, however, of a coffee shop in my own state that is actually promotes evil. Fortunately, the misdeeds associated with the misnamed Holy Ground Coffee House in Springfield have not gone uncontested. The shop is a facet of a nominally Christian ministry that has sponsored a movement to impose the death penalty on sexual minorities in Uganda.

As reported in the New York Times and MassLive, protests have been brought to the shop -- which mercifully is only open a few hours per month. Moreover, Sexual Minorities Uganda has partnered with the Center for Constitutional Rights in New York to sue the "pastor" who both runs the coffee shop and promotes fatally anti-gay legislation abroad.

Fortunately, I have also found a church-sponsored coffee enterprise that is actually doing a lot of good in Uganda. As reported in Java for Jesus, the Pennsylvania-based Ugandan Gold sponsors clean-water projects in coffee-growing communities while paying the vast majority of the retail price of the coffee to the farmers.

Posted by James Hayes-Bohanan at 5:45 PM