Living south of Boston with most of our family in Maryland, we drive through or around New York City much more often than we go to it. But I have found myself here in the City (yes, I am writing this from Midtown) twice in as many weeks. Last week, as mentioned on our department blog, I was one of more than 8,000 geographers attending our national meeting here. Today, I came -- again via Amtrak -- to give a talk on coffee at Yeshiva University. The train is the way to go: scenery, legroom, and wifi without any traffic or terrible drivers.

Because of shows like Friends, Seinfeld, Manhattan, and countless others, many Americans -- and fans of television and film throughout the world -- have at least some basic understanding of the geography of New York, particularly of the borough of Manhattan. The web site Time Formations is an interesting opportunity to explore Geographic Information Systems (GIS), building on the basics to explore an endless array of potential combinations of spatial variables.

For the image above, I chose to click "on" every data layer available -- great fun and colorful, if not particularly useful for analysis. In reality, geographers can use tools like this to look systematically at relationships among many spatially-variable conditions. Prior to GIS, it was often difficult to compare variables that were mapped in different ways or at different scales. Analysis in such situations still requires some professional care, but GIS does facilitate many novel approaches to spatial research.

December 10, 2012 Update 1: Artist and cartographer Jenni Sparks has brought her skills to a different kind of map of the city -- a hand drawing of the iconic island at a delightfully detailed scale. Like a modern, urban Erwin Raisz, she brings the landscape to life and invites exploration. The relatively small-scale overview below is posted along with several larger-scale samples on her blog, which includes a link for purchasing the entire map. I join Sparks in being grateful that New York has survived (for the most part) Super Storm Sandy. 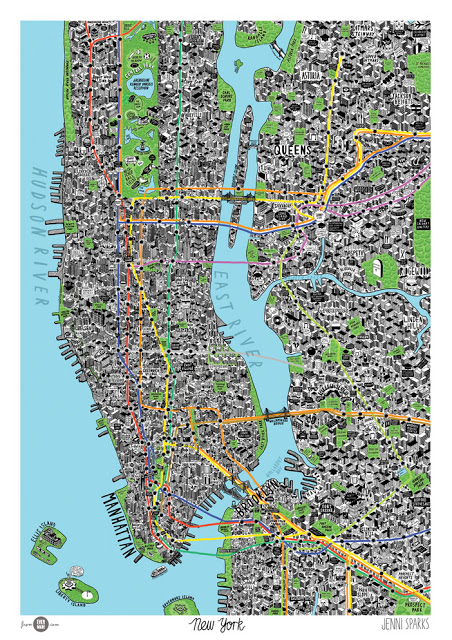 December 10, 2012 Update 2: In Mapping Sandy's Reach, I point to an interactive map that allows users to find out which of these familiar places were recently flooded. Some of them still struggle with recovery five weeks after the storm dissipated.

Posted by James Hayes-Bohanan at 1:06 AM