As I mentioned in my Hot or Not post this summer, neither major political party in the United States advocates a serious response to climate change, even as the urgency of the problem becomes increasingly obvious. Quite simply, substantial doubt about climate change exists only in the United States, while most of the rest of the world (aside from China) has moved on to trying either to slow it down, to adapt to it, or both.

Climate of Doubt is new Frontline documentary that describes how public opinion in the United States has been manipulated to support inaction in the face of mounting evidence. Not surprisingly, the documentary has already drawn vociferous objections in online forums from those whose delusions it describes.

In the face of mounting evidence that humans have seriously altered the climate, all manner of strange theories are angrily espoused, either denying that the change is occurring or blaming the change on natural factors, or both.

The statistical evidence for human-induced climate change was -- until recently -- somewhat subtle, and the denial theories focus on the aspects of the evidence that are most complicated. The physics involved are quite simple, however, and I have never seen the basic physical processes explained away.

:How simple is the problem? Have a look at Frosty.

What material does the magician employ as he pursues his dastardly scheme to melt the snowman? Glass.

Because of gases such as carbon dioxide, methane, and water vapor, the earth's atmosphere behaves in a similar fashion. Most incoming solar radiation (visible or shortwave) gets in, but some of the outgoing terrestrial radiation (infrared or longwave) gets trapped. This greenhouse effect occurs without humans, and we should be grateful for it!

What humans began to do about two hundred years ago, though, is to increase the concentrations of greenhouse gases in the atmosphere by taking the elements out of long-term storage and putting them in short-term storage -- for example converting coal that had accumulated over millions of years into gases that were released in dozens of years.

The effect is like thickening the glass on a greenhouse, or adding a blanket to a bed. It does not create heat, but it increases temperature in a specific location -- inside the greenhouse, under the covers, or in the case of the planet as a whole, within the troposphere. Those who decide that they do not "believe" in climate change are not able to explain this away, just as no other explanation can be offered for Frosty's puddleness. 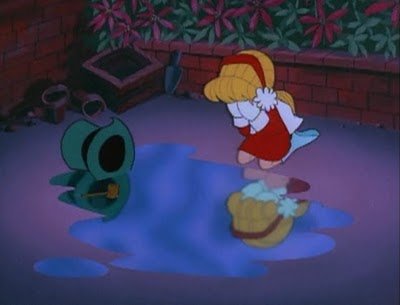 Posted by James Hayes-Bohanan at 4:53 PM