As I wrote recently in Frosty Denial, the United States remains singularly committed to ignorance in the area of climate science. Nobody has offered a plausible alternative description of the physics that explain a growing constellation of facts, but politicians, media, and a sizable slice of the general public remain convinced that there are two sides to the question of whether humans have been changing the climate.

This week, one of the most expensive storms ever to strike the United States has ravaged New Jersey and New York City a week before a presidential election that will decide whether the next four years will bring relative inaction or absolute inaction on climate change. (Sadly, our range of choices is not very wide, excepting Jill Stein.)

In much of the world -- even in some circles in the United States -- people who have actual planning responsibilities recognize that they can no longer afford to pretend that the atmosphere is not changing in problematic ways. I am working in a small way with the tea industry, for example, as tea scientists and policy makers try to discern the best way to advise farmers whose plants should remain productive over a period of decades. Closer to home, state governors have long been ahead of their more partisan counterparts at the federal level. Neither insurance companies nor the investors who set their stock prices can afford to deny the obvious, as has already been made clear by Hurricane Sandy.

Stark images abound that illustrate the unusual scope of Hurricane Sandy -- a slow-moving storm almost a thousand miles wide -- but a couple from New York are especially poignant. Not since Hurricane Katrina have images of rising water been so prominent within the United States. The automobiles sitting helpless in the flood waters, covered with a film of oil, remind us that our individual dependence on fossil fuels contributes to a growing assortment of collective risks. The (apparently false) image shared by Occupy Wall Street -- of a Scuba diver under Times Square -- reminding me of the similarly outfitted cabinet meeting held in Maldives in 2009. 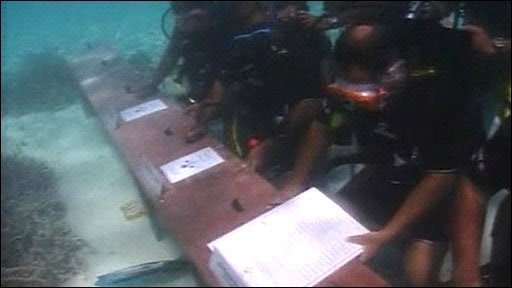 This morning, a BBC announcer openly questioned the long-term viability of New York City as a human settlement, and although that reaction might seem a bit premature, it is certainly the case that large population centers near sea level (which is where most of the world's large population centers are) will are now subject to increasingly frequent and severe threats.

Bill McKibben and the 350.org movement have been using a "connect the dots" metaphor for the past couple of years, encouraging people to draw the most plausible -- and useful -- conclusions they can from a rapidly growing body of evidence.

Hurricane Sandy -- and the attendant blizzards, storm surges, power outages, and deaths -- have proven to be such a large DOT that it is actually bringing discussions of climate change back into political discourse (where it rightly belongs). The policy questions that are emerging fall into two categories. The New York Times, for example, has cited the need for a strong federal role in disaster response. Governors and mayors -- most notably Gov. Christie of New Jersey seem grateful that FEMA has adequate funding and a director with actual qualifications.

At this point, some readers might be wondering why the title of this post suggests a renaming of the hurricane. The idea is inspired by a collection of excerpts relating the super storm to climate change, which appeared during the storm on Treehugger. I recommend reading it for all of the interesting questions and analogies it raises, but the most intriguing is this:

In light of recent attention to bicyclist Lance Armstrong, this is particularly apt. Just as the distinction between his individual performance and the enhancement of that performance cannot be clearly made, the contribution of climate change to this week's mayhem cannot be calculated in detail. The timing of the storm probably contributed as much to the catastrophic coastal flooding as did sea-level rise, but the fact is that both contributed.

Of everything I have read this week, however, it is a speech based on the work of Alfred Wegener that I found most interesting. A century ago this month, Wegener began to revolutionize the study of geology with a seemingly elementary observation. The coastlines of eastern South America and western Africa appear to have been connected at some point in the past. From this simple observation arose the theory of plate tectonics, which initially earned Wegener nothing but scorn. Beyond the usual, healthy skepticism about new theories, he endured scorn from those for whom his ideas were inconvenient.

In New Frontiers, Wegener biographer David Lawrence gives an eloquent -- and alarming -- description of America as a nation that has always been conflicted about science. We gladly accept the productive innovations that arise from science, but are too quick to dismiss scholarship that conflicts with our profits or ideologies. Quoting Isaac Asimov, Lawrence calls out the now widespread notion that "my ignorance is just as good as your knowledge."

Last-minute addition: Today the radio program Fresh Air included a very informative interview with Radley Horton, a scientist who serves on New York City's climate-change panel. He does not claim that climate change "caused" the storm, but he does talk about some ways that the general trend and the specific event are related. Later in the day, All Things Considered aired an equally important interview with Andrew Hoerling, who explains that climate change does not seem to be changing the frequency, intensity, or track of hurricanes, though it is correlated with many other kinds of extreme weather. Both interviews bear careful listening, because it is easy to extrapolate too far from either set of statements.

Posted by James Hayes-Bohanan at 3:58 PM