Thanks to my friend Gerard -- a librarian and geographer -- for sharing this cartogram representing the 2012 presidential election. Each state (plus DC, which should be a state) is shaded according to the disposition of its electors (red for Mitt Romney and blue for Barack Obama). More details, including the average of pre-election polling by state) are provided on the Electoral Scoreboard 2012 page. The cartogram technique uses area to represent data, so that results are visually proportional in ways that might be obscured in other kinds of mapping. In this case, for example, many of the states won by Obama have relatively high population density, so that a glance at a conventional map -- which represents each state by its surface area -- makes it appear as if Romney won in a greater portion of the country. By area, he did, but by population, he did not.

Other maps have challenged the red state / blue state notion itself. Robert Vanderbei's Purple America is the best example. The 2012 result map shown below is distinct from more common electoral maps in two ways. First, it shows results by county rather than state. A state that votes for one candidate almost always has some areas in which the other candidate prevailed. Second, each county is shaded according to the proportion of the vote going to each candidate. The differences in voting are substantial, but in most places the vote is much closer to 50/50 than one would guess from watching television.

I have written several articles previously about the power of politicians to choose their voters in our system, and this often contributes to the impression that differences are stronger than they are. My own state (where gerrymandering was invented) is represented by exclusively by one party in the House of Representatives, and representation of the other party in Ohio is also greatly out of proportion.

The blogger Skeptical Avenger has shared a map by Chris Howard that goes a step further, using hues as in the map above, but adjusting the saturation according to population density. The result reinforces the notion that urban areas tend to be more left-leaning, thous some swaths of rural blueness also appear in middle tones, notably in Vermont and (a surprise to me) in many Piedmont counties in the South. The result is impressive, though I would quibble with the blogger's emphasis on the word accuracy, since every map is a set of choices that are not always directly comparable. 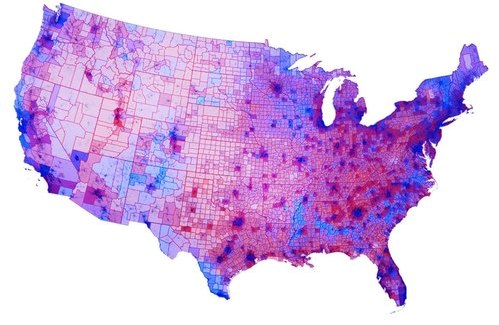 I was pleasantly surprised that this election was decided in relatively short order, compared to the year 2000 debacle. I had boldly predicted that we would not know the winner until Thanksgiving, and I am very happy to have been mistaken. As it was, the gap between the two leading candidates was big enough that Governor Romney and his allies conceded in the wee hours of the next morning. They had held out hope and did not  concede until a couple hours after most non-partisans were convinced of the outcome. This is because they had been believing the echo chamber of their own pre-election pollilng. Still dawn did not see phalanxes of lawyers descending on election offices, so faith in our elections was -- at least for now -- restored. 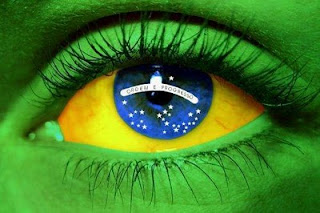 We Could Learn A Lot From Brazil

I could not help, however, thinking about the comparison to Brazil. I have had Brazilian guests with me on voting day here in Bridgewater, and I have been in Brazil on an election day. The differences are dramatic and quite instructive for the United States. . First of all, Brazil has one Sunday for national elections (Congress and the president) and every four years. Municipal elections are also held every four years in alternation, so that a national election day is held every two years. The simplicity of this scheduling compares favorably with the ease with which people in the United States can become confused about the timing of local elections.

Voting in Brazil is incredibly reliable, with machines audited in real time on election day. The measures to ensure the validity of results is remarkable. Voting in Brazil is also mandatory, generating a fair bit of travel, often to one's home of origin. Some claim that the elections are even a bit sexy, as some areas have become attractive for celebrity voting.

When I was in Brazil for an election, a friend took me from Sao Paulo (where he was living) to Minas Gerais (where he was from), so that he could vote. (And so that I could enjoy his family's coffee farm.). There his sister joined us, though she had been working in California!

Brazilians take pride in their elections, and I witnessed the fact that results were available online -- even for minor local races -- almost immediately. In the United States, by contrast, even during this relatively undramatic year, national results were quite slow in some states, with local elections in Arizona still being disputed a week after the polls closed.

Posted by James Hayes-Bohanan at 3:53 PM