Toward the end of the summer, I enjoyed a Boston Globe article about rowing clubs in Boston and Hull. For some reason, I found myself going quickly from wistful thoughts of how nice that would be to actually getting myself involved. Not in those towns, as it turns out, but in New Bedford, whose Whaling City Rowing was mentioned briefly. Not only is New Bedford easier for me to reach, but it has the added element of a connection to the historic whaling heritage of this region. I am very glad that whale hunting is no longer practiced or sanctioned here, but the tradition and its geography are fascinating to me, so I am glad to be connected to it in a small -- and benign -- way.
For a couple of months now, I have been rowing once or twice each week, learning the lingo (Avast!) and techniques of rowing. I have not joined a regular team so far, but have been part of a circle of about a dozen rowers (more than half of whom are middle-aged teachers like myself), five or six at a time. A full boat includes five rowers and a steerer, but we can operate the boat with four or even three rowers.

Rowing is a thorough workout that makes being outside at temperatures close to freezing quite enjoyable. It is also a chance to see a working harbor at different times of the day and different times of the year, with an incredible mix of boats and ships, including one of the country's largest fishing fleets.

For each row, the club members who steer the boats make determinations about weather conditions, drawing on their own experience and several online resources.  For rowing in New Bedford -- which we normally restrict to the large and well-protected harbor, steerers can begin with a marine forecast from The Weather Channel. This forecast is based on conditions just outside New Bedford's famous and impressive sea wall, but it is good to know what is going on "out there." Inside the harbor itself, the New Bedford weather report of the US Harbors Network are quite important. The sometimes significant difference between the two helps to explain why "harbor" is synonymous with "protect."

Some of the crews are pretty hardy, so cold alone is not enough to cancel a row, nor is rain. Wind, perhaps, or heavy rain. Or enough cold to freeze the boat in place. Otherwise, the rowing activity itself provides enough heat to make for a quite enjoyable outing when conditions might seem a bit chill. It is surprising, in fact, how much I enjoy the cold rows, given my fondness for living and working in the tropics. 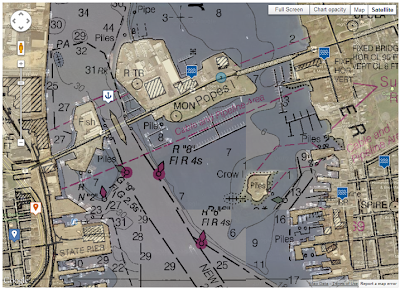 The US Harbors Network is good for more than weather reports, the US Harbors Network web site is a terrific source for armchair coastal explorations. The site provides high-resolution aerial photography that is integrated with detailed navigational charts of more than 1,100 harbors. Viewers can toggle among views of the charts, the photographs, and (as shown above) a 50-percent opaque overlay. The three whaling boats maintained by our club, by the way, are kept at the docks shown on the south side of Popes Island. We enjoy rowing around Crow Island, which has a family home with a lot of interesting and nautical "lawn art." If we row to the west side of the harbor, we "power up" to minimize our time in the very busy channel. 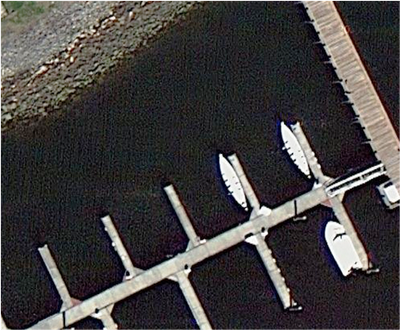 The high-resolution photography allows me to show off our boats, two of which were moored on adjacent docks when the photography was flown. These sleek beauties are about 28 feet long, with five oars ranging from 15 to 18 feet. Yes, each oar is a bit different, and so too is the experience of rowing in each of the five seats. Additionally, the steering oar is 22 feet long, and can be used either as a tiller or to propel the boat near obstacles. Given that all of the oars are stored in the center of the boat, the launching and docking of the boat requires a lot of careful cooperation.

Cooperation is, as it turns out, a key aspect of nautical life. Boaters of all kinds -- amateur and professional, military and civilian, large- and small-craft -- depend upon each other for certain courtesies that can quickly become quite critical. The sharing of information and responsibilities is essential for comfort and safety. The US Harbors Network web site reflects this spirit of cooperation, blending as it does geographic information from a variety of private and government sources. A September article about rescues of marine mammals near Provincetown is an outstanding example of that nautical spirit of pulling together.

Posted by James Hayes-Bohanan at 2:19 PM