As world leaders gather once again to discuss change, hopes are high that something tangible might actually result from the discussion, though the United State remains hampered by ideology. In any case, a series of maps from the New York Times illustrates part of what is at stake.

The maps, under the dire but accurate title What Could Disappear allow readers to compare the geographies of two dozen coastal cities with several possible futures. The 5-, 12- and 25-foot scenarios show what would be under mean high-tide over coming generations and centuries. 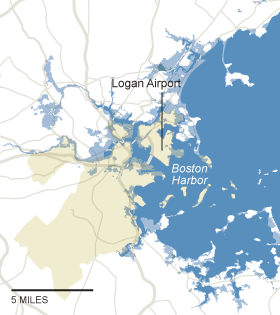 This five-foot scenario for Boston, for example, shows (in light blue) the 9 percent of the city (26 percent in Cambridge) likely to be "lost" in the next 100 to 300 years. For those who think in terms of our  responsibilities to our grandchildren, these are not theoretical futures.

Being above high tide, of course, is not the same as being above the threat. Mean high tide is the base above which all storm surges are measured. All of the damage from Super Storm Sandy occurred above mean high tide.

Posted by James Hayes-Bohanan at 3:02 PM