Today's On Point discussion of Better Fracking is informative and thorough. It is important, though, to listen to the entire program. The headline is about reductions in the amount of good water turned into poison. But like "clean coal," this is a distinction without a difference. 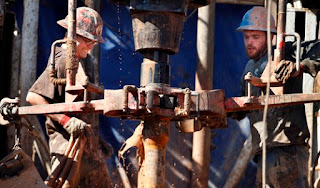 As the scientists on the program stress repeatedly, reducing the amount of water used in fracking partially addresses only one of several fundamental problems with this approach to energy development. At the end of a long, careful discussion, it remains clear that fracking is not part of a viable energy policy. If allowed to continue, it will merely delay the need for a comprehensive conversion to sustainable energy.

Learn more about fracking from a Nation Action blog post that includes an 18-minute video.

December 7 update: Several instances of scientific fraud and conflicts of interest related to pro-fracking research have led to disciplinary action against professors at the University of Texas and elsewhere.

Posted by James Hayes-Bohanan at 3:13 PM