For the three years before we moved to Bridgewater in 1997, Pam and I lived in the Rio Grande Valley of Texas. It is not a valley, and the rio at that point is not grande. The river that rises in the mountains of New Mexico forms the border between arid parts of the former Republic of Texas and Old Mexico, and is rather tired by the time it reaches the delta in which we lived. But it is recognized as "The Valley" throughout Texas, and it is relatively lush compared to the deserts and grasslands that surround it.

Near the end of our stay there, I taught geography in the Valley, at a campus that is formally known as The University of Texas at Brownsville in Partnership with Texas Southmost College. Some of my students were international students living it home -- they walked over the river for class, just as I sometimes walked over the same river for lunch and shopping. Teaching there was invaluable in preparing me for the teaching I have been doing in Bridgewater ever since.

Texas & M University at Kingsville, Alice Extension. TAMU-K itself had been remade from Texas A &I, following a lawsuit that had failed in courts of law but succeeded in the court of public opinion.

That is to say, a class-action suit had been filed against the state of Texas over the lack of four-year universities in the area south of San Antonio. This area is just a little corner of Texas, of course, but bigger than many of the other 49 states, and home to millions of people whose access to higher education was seriously limited by the absence of the big two -- University of Texas and Texas A & M. The courts did not force the creation of new schools, but the legislature was sufficiently embarrassed to act, and each of the two big state universities created three new campuses, building on existing schools. In Kingsville, this led to a conversion of the two-year Agricultural & Industrial College into a four-year Agricultural & Mechanical University. When I visited campus, "A & I" was still on the water tower. The professor who hired me said that tradition was such that nobody would be brave enough to climb up and paint the new name, for fear of being shot at. He was joking, of course. Sort of.

All of this background is by way of explaining how we came to watch All She Can -- a movie well outside our usual range of interests -- and some of the reasons we found it so satisfying. According to an informative interview with writer-director Amy Wendel, the film was inspired by a 60 Minutes story about military recruiting in the nearby town of San Diego, Texas, where deep patriotism and limited options are equally important sides of the story of service. (My 2010 post on the belated recognition of Felix Longoria explores the legacy of military service in the region in more detail.)

Although the filmmakers come from far outside the region, they bring the viewer very close to the ground because they began the project with extensive listening. The main plotline was inspired by the very first interview with local youth -- like us, Wendel had not really heard of powerlifting as a sport for high-school girls, and was intrigued by this. Casting included a local actress in the main role, and writing avoided the cliched sequence of hardship-to-victory that makes many sports movies hard to take. The protagonist is complex, makes mistakes, and manages to make this story place-specific and universal at the same time.

The reason we found this film so effective is that it really conveys what geographers call "sense of place" -- those characteristics that people use to build identity of and around the places they live. The soundtrack features a "Benavides Born" -- a song that condenses many of these themes in just a few minutes of music. Originally the title of the film itself, the signature song has been produced with a video montage that deepens many of those connections. What is most interesting about the song -- especially as it is represented in the music video -- is that it perfectly balances pride in the place with a strong desire to get out of the place.

It was from the film that we learned of a significant upgrade in the educational landscape of Alice. Texas A&M-Kingsville was reaching out to this part of King Ranch country through a very modest extension program in which I played a very modest part; the arrival of a branch of Coastal Bend (Community) College is surely an improvement for the town, and is part of what makes it a relative metropolis. 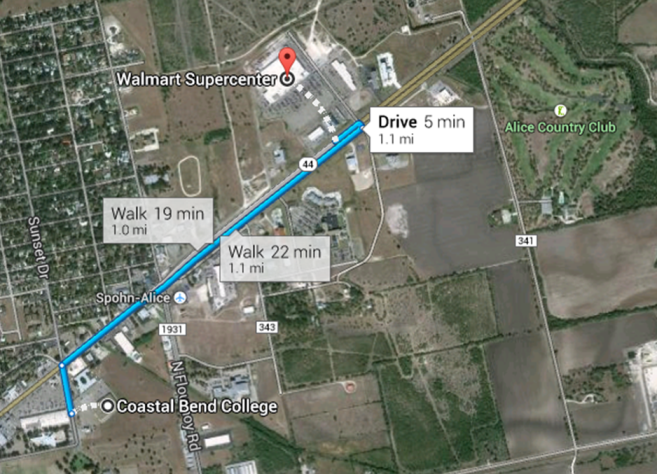 From the film it was clear to us that the campus is housed in a former WalMart store. It is part of WalMart's scorched-earth approach to retailing that after its "regular" stores eliminate local competition, its "super" stores eliminate them. From the point of view of WalMart, it does not matter what happens to those abandoned boxes, as long as they do not become retail space. They can sit empty for years, or they can be leased or sold to local governments. One of the most storied examples has been the recent move of the McAllen Public Library (where my favorite librarian was once Head of Reference) into an abandoned WalMart. Coverage in Slate, Huffington Post, New York Times and American Libraries emphasize the creativity of the architecture -- which is indeed impressive -- rather than the overall strategy of wage suppression of which this story is a part.

Just as I was finally posting this review, I found this brief audio story about the exhumation of human remains in Falfurrias, through which I drove each week that I taught in Alice. A secondary border crossing was a small annoyance for me, but for many making the journey north, it is one obstacle too many, and some do not survive their efforts to detour around it. A recent graduate in forensic science applied her skills to the removal of bodies buried anonymously in the scrublands, and shares what she learned from the experience.

Posted by James Hayes-Bohanan at 8:51 AM