In English, is sounds like a place not much like Alaska, and I'm tempted to call it "Very Alaska" in response. The name, however, has nothing to do with "not" and everything to do with "near." The Unangan people who first inhabited it called it Ounalashka, meaning "near the peninsula."

It is also connected to the entire world. On the map above, zoom out to see how very remote this community is. Its situation is isolated: in almost any direction, one could travel for thousands of miles before finding neighbors. Zooming in, however, reveals why the town is connected to so many places around the world. Its site is fortuitous, though, for making global connections. The city's harbor is doubly sheltered, as Iliuliuk Bay is tucked away within Unalaska Bay, on the Bering Sea side of the island. (From the National Park Service I just learned of the great strategic importance of this and neighboring islands during World War II, the only U.S. territory to be occupied by Japan.) 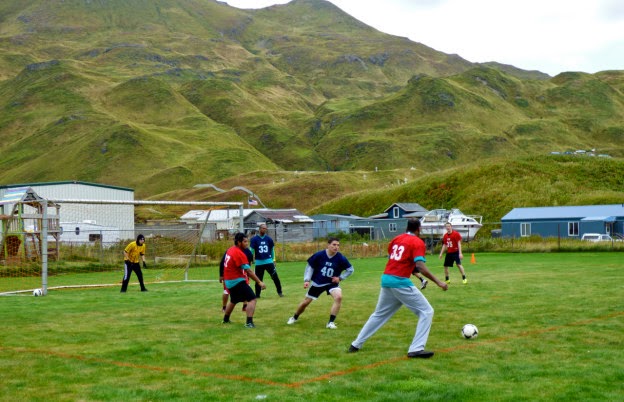 The city is in the United States, which means could be expected to have little or no tradition of soccer. But it is visited by fishing fleets from all the rest of the world, and it has embraced the soccer traditions that all of those sailors bring to the city, celebrated with its International Friendship Cup over the past several decades.

The story is about a community celebrating the connections it has with the rest of the world, and learning some of the ways in which people are more alike than different.

Posted by James Hayes-Bohanan at 10:39 AM