Days of the Deads

I write this on one of my favorite days of the year -- Dia de los Muertos. This year, it is a cool, dark, and stormy day as we site by a fire in a house by the sea, bringing many appropriate elements together. Although she is not directly associated with the day, the water and the howling wind remind me of La Llorona, and I will be sharing both haunting and humorous versions of her story with my students during the coming week.
As I started looking for information to share about the holiday itself, I found a terrific Smithsonian travel article that puts Día de los Muertos in the context not only of the Celtic festival Sahmain but also of a variety of ways that people celebrate their dearly not-so-departed all over the world.

As you read Festivals of the Dead, be sure to follow the links to more detailed geographic information that author Natasha Geiling has included throughout, and visit the sites on the map I created to accompany the article. Note that I include only one prominent location for each holiday; Geiling emphasizes that all of these holidays and festivals are celebrated across broad cultural regions. She also emphasizes that the participation is very genuine, and that visitors show approach them with respect, rather than as spectacle.


Of course, as a Latin Americanist, Día de los Muertos is still my main entrance, especially at this cross-quarter date, and I am pleased to share a few serious and not-so-serious references I have found recently. Those seeking an overview of the holiday can begin with an article from National Geographic Education. Writing for Huffington Post, Daniel Cubias explains the differences between this weekend's two holidays -- and the problems of appropriating one in the celebration (and marketing) of the other. Writing for Indian Country, Steve Russell goes further, arguing that the two holidays have little in common.

Those caveats notwithstanding, any illumination of the Mexican tradition is inevitably going to take place during the hoopla surrounding its Celtic cousin. A week or so ago, Pam and I were on hand for the Taunton-area premiere of Book of Life, an animated feature that adds levels of needless plot twists to an otherwise useful exploration of the the spirit of the holiday. Pam then learned of an entire new animated series Muertoons -- which we can only hope is as delightful as the title and the opening credits (sadly, the series itself is not yet available, but is due out this year).

Courtesy of The Selvedge Yard, it was on the Day of the Dead that I saw this fascinating image, Morning Tea by Serge N. Kozintsev -- a visual trick much more interesting than the sugar skull I decorated a couple of nights ago, and one that captures the fullness of life in an image of death. 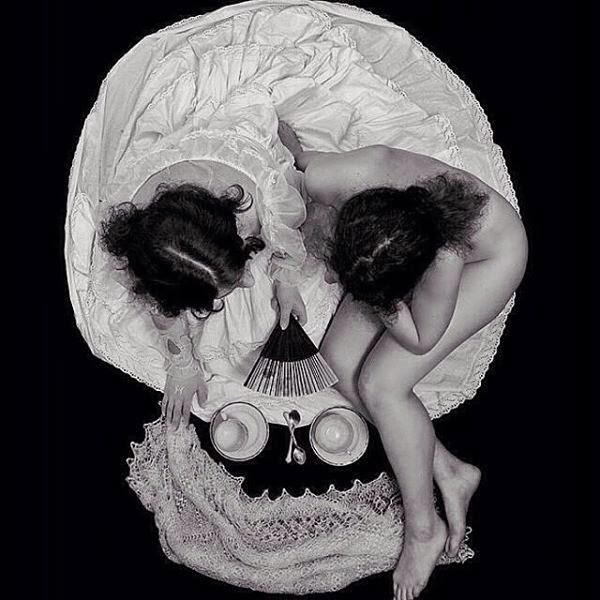 Posted by James Hayes-Bohanan at 6:45 PM