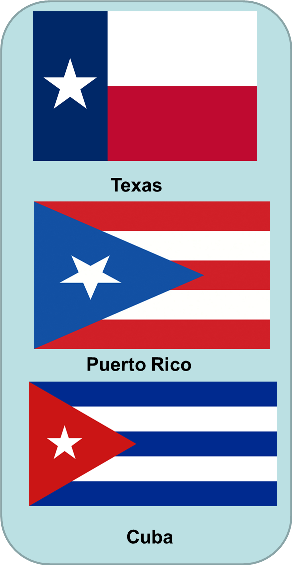 I post these flags for no other reason than the fact that I frequently forget which is which. I was reminded of this while watching Rosie Perez' excellent film ¡Yo soy Boricua, pa'que tu lo sepas!

These three territories share the same three colors and each sports a single star, along with other design elements. All three were separated from Spain by the United States and the Spanish language remains associated with each, though to different degrees.

My favorite librarian reminds me that about 20 years ago, a court house in Texas was accidentally flying the flag of Chile. That is certainly a mistake I could have made.

Posted by James Hayes-Bohanan at 6:05 AM