An area larger than our smallest state has already burned this season in our largest state. That is, something like 2,000 square miles have burned in Alaska. For comparison, Rhode Island and Delaware are about 1,500 and 2,500 square miles, respectively. As a percentage of the total land area, of course, the burn is trivial -- about one third of one percent so far. But as coverage in Slate points out, this is actually part of the problem: fire-fighting resources in Alaska are spread over an impossibly large area. Moreover, the amount of fire is a great great increase from the past, perhaps the most destructive burning season ever.

Of course, forest and brush fires are natural occurrences that do not destroy land; they just change what is on it. But those degree and intensity of the changes are not natural, and they are damaging to resources we rely upon and should care about.

To learn more, start with Nathan Rott's vivid reporting on the scope and severity of this year's fire season in the Final Frontier state. Speaking with local experts, his story also explains why these fires will last longer than similar fires elsewhere would.
For a deeper explanation of the interactions between fire policy and climate change, listen to Steve Curwood's extended discussion entitled Climate Change Fuels Forest Fires. As with many environmental threats we face, climate change compounds problems that have other causes.
In the 1980s it began to become apparent to many foresters and landscape ecologists that a half-century of success if fire suppression had created conditions that would make fires more difficult to contain. The foresters understood this in the familiar language of fuel loads, which are mentioned in the Curwood piece cited above.

In the 1980s I was fortunate to be studying with a landscape ecologist who helped me to understand an important, additional dimension of the problem: patchiness, to which Curwood's piece also alludes. Not only have decades of success allowed fuel to accumulate in millions of acres of forest; but the normal patchwork of old and new forest has been lost. Prior to the very successful campaigns embodied in Smokey the Bear, if one area of forest had a heavy load of fuel, it was likely to be surrounded by a patchwork in which some areas had less fuel because they had recently burned.

The result is a landscape in which fire is likely to behave differently than it did a century ago, in both horizontal and vertical dimensions. The lack of a patchwork facilitates horizontal movement of fire; heavy fuel loads help the fire to reach the canopy much more readily. This can increase the temperature and intensity of the fire, and is much more likely to result in damage to trees that have evolved to withstand occasional, low-temperature ground fires.

As I mention above, these landscape-scale effects of fire policy were not understood for about 50 years -- the amount of time it took to reach uniform fuel loads over large areas. It has taken a couple more decades to understand the ability of climate change to intensify the resulting fire regimes -- and to add extreme temporal variation, as each fire year can be very different from the last.

For more thoughts on fire and climate, see my Hot or Not? post, written in the hottest month of the last presidential election cycle.

As if fire in Alaska were not concerning enough, consider the emergence of a new urban wildfire threat in Washington state. Eastern Washington is drier than the Pacific coast, but the threat of fires in downtown Spokane is nonetheless a novel problem. 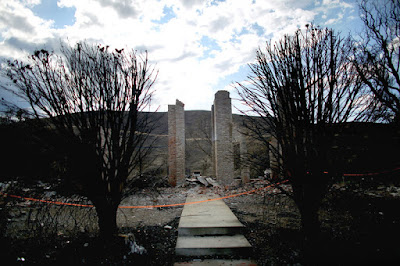 The fire season of 2018 is, predictably as devastating as recent years, perhaps more so. The combination of climate change, wildland/urban sprawl, and historic patterns of fire suppression have led to massive, deadly fires. The continuous worsening of fire danger has led one inventor to develop a supertanker of aircraft, able to deliver unprecedented quantities of fire suppressant from the air, and to do so in a controlled way that is more effective against fire and less dangerous to ground crews.

The plane has been used in Chile and Israel but has not yet been deployed in the United States because of unspecified bureaucratic obstacles.

Posted by James Hayes-Bohanan at 11:33 PM