Geographers think a lot about regions, as they help us to answer the fundamental questions of our discipline:

In other words, identifying regions can be a useful step in describing spatial patterns, explaining them, and applying that understanding to important (or merely interesting) problems.

Regions can be defined in a variety of ways, such as political boundaries, physical features, or transportation patterns. If we define a region based on common characteristics, we call it a formal region, though some geographers now use that term for "official" regions. If we define a region based on patterns of interaction -- such as a market area or a river basin -- we call it a functional region. Of course, higher degrees of interaction within a functional region might cause it to develop common characteristics of a formal region. 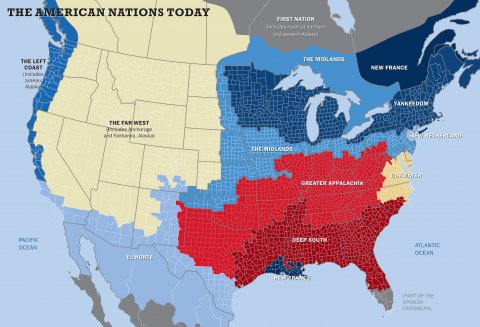 All of this comes to mind as we consider author Colin Woodward's book American Nations: A History of the Eleven Rival Regional Cultures in North America, recently excerpted by Business Insider. It is introduced by Matthew Speiser, who fails to credit Joel Garreau's 1982 book The Nine Nations of North America, of which the more recent title is certainly derivative, and who describes it as a book about the United States, which is only partly correct.

Still -- although the author uses "history" in his title instead of "geography" -- this is a nice example of defining a region in cultural terms. Woodward focuses on predominant settlers (European only) and over-emphasizes political philosophy, while revealing his own. But this is appearing in the Politics section of the BI site, so that emphasis is understandable.

It rings true to a certain degree, and like any good regionalization, it serves as a good thought experiment. Do the regions make sense? How might they be adjusted if other factors were considered? How relevant are they to questions of political or economic differences?

Most interesting to me is the question of degree. I agree with some of the characterizations Woodward makes. I have visited all of the regions defined and I have lived in half of them, so I agree that the United States varies quite a lot from place to place, and many of those differences are reflected in politics. But I also think that the variations within these regions are more substantial than Woodward allows, and that we are much closer to a purple nation than to a collection of red and blue places.
Posted by James Hayes-Bohanan at 2:32 PM