When teaching about groundwater, I begin with Once in a Lifetime because of the "water flowing underground" refrain and because, well, because David Byrne. (April 2020 update: for more fun, watch Angelique Kidjo's fantastic version; I had the great privilege of hearing her perform this in Providence a few weeks before the world shut down.)

I usually next read McElligot's Pool to my students, even though it was written for people about 1/3 their age. I read this work from Dr. Seuss because it perpetuates the widespread misconception that water flows underground in open streams, a misconception that is reinforced by the dubious practice of searching for water with divining rods.

Water flowing underground in open streams is a  misconception, I tell them, except in karst landscapes. Where limestone is overlaid by harder rocks, the resulting caves and pits are sometimes connected by waterways that can be traced over long distances with inks or even fishing floats.

From the ever-fascinating Atlas Obscura comes a fascinating story about another kind of exception, and of some intensive geographic research with tangible benefits. Sarah Laskow reports on Eymund Diegel's research into the underground waterways of Brooklyn, New York. 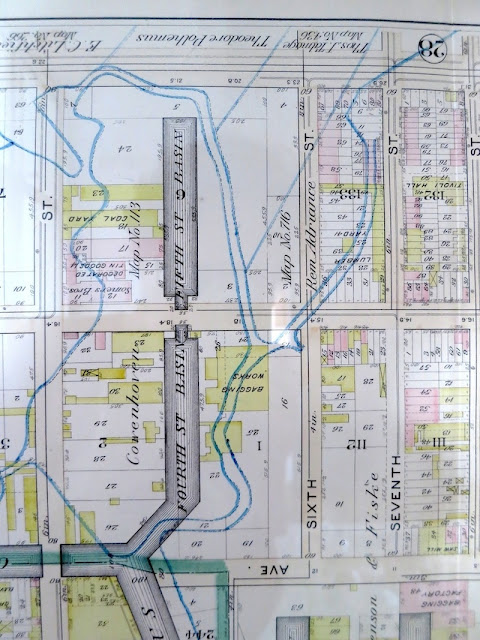 He became aware that one of the earliest buildings in Brooklyn was along a brook that is no longer present, fed by an entire stream network that disappeared as the street grid was built up. Combining his expertise as a cartographer with his curiosity and some creative field work, Diegel has been able to identify water courses and to advocate for their restoration. In many cases, streams had been routed into pipelines, but after several centuries, many of those pipelines have failed and water has sometimes found its way to its pre-urban pathways.

It is neither feasible nor desirable to bring all of the surface waters back to the surface, but it turns out that careful mapping of these waterways can lead to better solutions to all kinds of problems, such as sustaining tree plantings to reducing the flooding of basements and subway tunnels. The more that is known about the fine details of the watershed, in other words, the more environmental resilience it will have.

A similar story has unfolded a few miles to the north, where the Saw Mill River had long been forgotten beneath the heavily industrialized downtown. Bringing this tributary back to the surface has been the proud achievement of Daylight Yonkers, which has shown the many ecological, social, and economic benefits of creating an urban waterfront park where there had once been only sewer pipe. I had the privilege of visiting this park when using the nearby Yonkers train station, and can attest to its aesthetic as well as ecological success.


Posted by James Hayes-Bohanan at 5:00 PM