Oddly enough, I have never been on this sort of bus in Nicaragua, though we rode the equivalent frequently when we lived in Mexico in the summer of 1989. 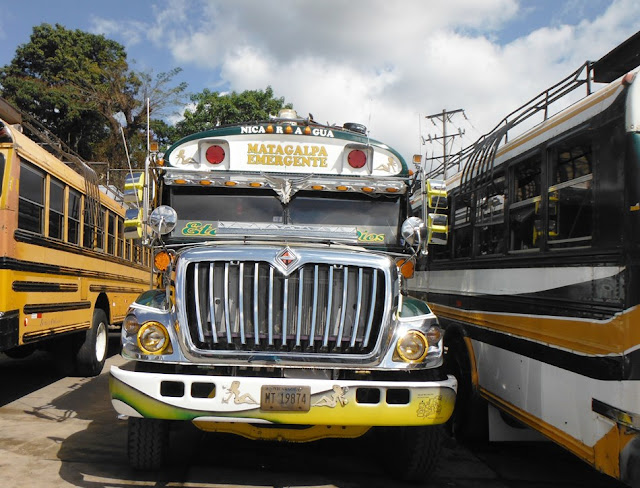 Sometimes called "chicken buses" because people can carry chickens or whatever else they need to carry on them, these are the workhorses of rural Central America.
We see a lot of these, but I was particularly attracted to this one because it is parked between two other buses at earlier stages in the process.
When a bus arrives from the United States, only the name of its school district is painted over; otherwise lt looks like the bus to the left, which could be rolling down my own street in Bridgewater. The only enhancement so far is the all-important roof rack.
Gradually, the new owner gives it some new paint, as in the bus on the right. As money is earned from fares, personal flourishes are added, until the bus becomes a reflection of the owner's personal style (including, in this case, a bit of machismo on the front bumper).
These are privately-owned public buses. They are an excellent example of reusing something that might otherwise be discarded. The buses are ideally suited to rough rural roads and to carrying cargo from chickens to coffee -- I have seen them traversing muddy roads that had stranded many other vehicles.
The one downside to these is that they tend to be rather poor in terms of air emissions, though a single old bus emits less pollution than the dozens of pickup trucks it replaces.

Posted by James Hayes-Bohanan at 2:13 PM