NPR begins a story with the phrase "a pipeline about to be built," in effect conceding defeat for the Sioux people and the water they are standing to protect.  The story continues quite usefully, though, in describing Sioux leader Dave Archambault's call for peace and prayers as they seek to stop a pipeline. The conversation includes an instructive examination of how notions of private property inform the current conflict at Standing Rock.

Latino USA host Maria Hinojosa reports on her the Standing Rock encampment in North Dakota, where indigenous people from throughout the world have united to demonstrate against the Dakota Access Pipeline. This report is a bit longer than a typical NPR piece, but well worth listening to in its entirety, as she puts this particular conflict in a hemispheric context. She cites the eagle and condor prophecy, about the coming together of indigenous people of North and South America.

Maps of the project available online have been of remarkably poor quality. Thankfully, a cartographer-blogger named Northland Iguana has recognized the problem and created their own map. The accompanying blog post describes the problems with existing maps and geographic considerations regarding the conflict itself. 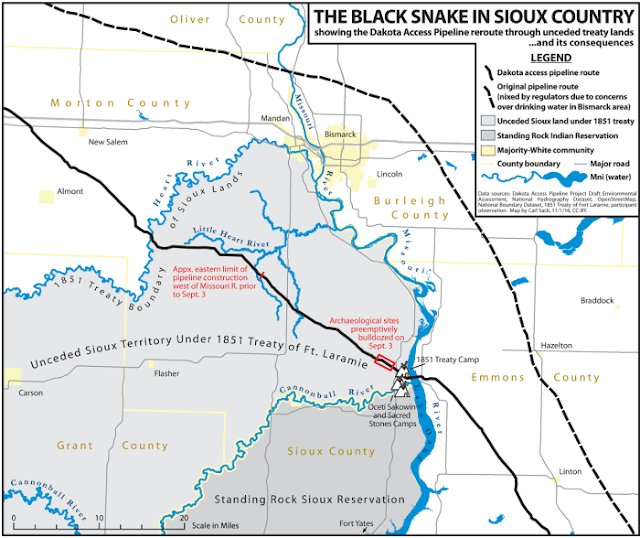 As of November 2, the latest development in this story is that President Obama has expressed willingness to intervene in the routing decision. For over two centuries, the U.S. Army Corps of Engineers is responsible for issuing permits for any activity or construction that modifies or impacts navigable waterways in the United States. This makes it the oldest environmental agency in the United States, and of course it reports to the President through the Secretary of the Army. President Obama has not suggested that he would heed the broader call from indigenous people and climate activists to prohibit this project, nor has he pledged quick action on routing.

He has, however, expressed willingness to intervene regarding some of the most immediate concerns of the protesters. 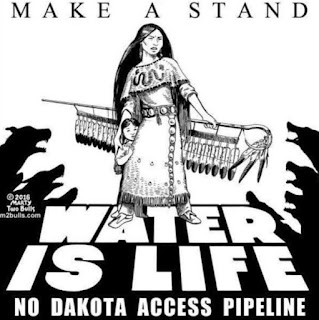 On November 3, the Los Angeles Times published a persuasive and informative editorial urging a complete stop to the pipeline project, citing not only the specific problems with the route -- which was moved closer to indigenous people in order to protect non-indigenous people -- but also the relationship of this project to climate change.

#StandingRockSyllabus is a definitive collection of maps, timelines, blog posts, letters, and other resources related to the protectors at Standing Rock.

Posted by James Hayes-Bohanan at 1:19 PM