From Tragedy to Gratitude

Today is the 100th anniversary of a terrible tragedy in Halifax, Nova Scotia -- a maritime accident leading to an explosion whose destructive power would not be exceeded until the bombing of Hiroshima in 1945. It is also the beginning of a century-long (so far) story of redemption and gratitude.

I learned the general outline of this story shortly after moving to the Boston area in 1997, but I learned a lot more from a brief conversation on NPR's Morning Edition today. Journalist Steve Inskeep discusses the accident in the context of U.S.-Canadian relations with John U. Bacon, author of The Great Halifax Explosion.

Spoiler alert: I knew that the people of Halifax continue to send the best Christmas tree they can find to Boston in gratitude for the help that came from our city to theirs. From this conversation, however, I learned just how significant the gesture was in the context of strained relations between the two countries at the time. In our dangerously xenophobic times a century later, it is good to be reminded that most people are of good will. 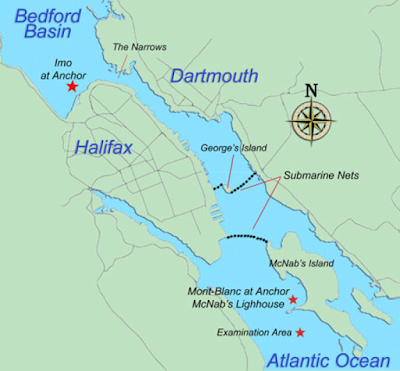 I mentioned the radio story to a colleague and friend who teaches the geographies of Canada and the United States in my department. She shared a number of resources, including a map that will help listeners better understand the accident and an excerpt from the CBC production Shattered City.