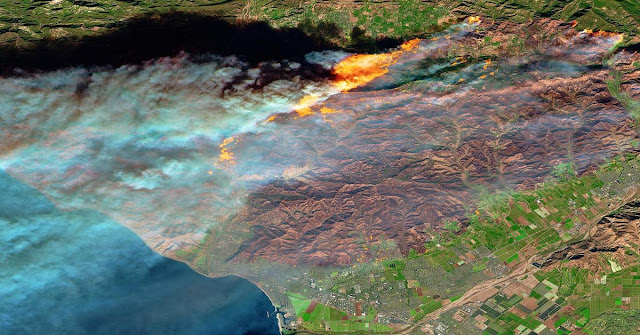 As reported by CNBC, recent fires in California have been quite startling when viewed in satellite images, most dramatically in the December 5 image above, captured by the European Space Agency Sentinel-2. The report includes the long-archaic superlative "visible from space," which is also true of objects as small as my garage on publicly-available imagery and as small as my dog's eyelashes with spy satellites. (Well, maybe I exaggerate; I have no way of knowing.)

Back to the original story -- the reporting provides several examples of the use of geotechnologies on the part of NASA and other agencies both for monitoring climate change and other changes in earth systems, and to guiding responses to disasters. It may be in part because the monitoring verifies uncomfortable truths about human interactions with the environment, that NASA is being directed to return its focus to lunar exploration.

Using clear-sky imagery -- from NASA by way of Google -- the same area of Ventura County can be seen to include not only seascapes, hilly scrubland, and urban areas, but also active petroleum exploration. Into the area between Dulah and Route 33 to see that each of the speckles in that part of the image is a parking pad around a petroleum well.

Like many people of a certain age, I cannot hear the words "Ventura County" without this song playing in my head, as it has been doing now for a couple of weeks. The YouTube user "Stay Tuned" has done us the favor of creating a slideshow that pays homage to the beauty of the area in more settled times.

Posted by James Hayes-Bohanan at 2:35 PM