The Coffees of Tea Island

As I mention quite often in this space and elsewhere, the greatest advantage of teaching is that I get to keep learning from my students. (Sadly, some of my colleagues are not very open to this, but those who enjoy teaching are.)

In this case, I asked my honors coffee students (yes, that is a thing!) to read an important BBC article entitled The Disease That Could Change How We Drink Coffee. It is about roya, also known as coffee leaf rust, also known as one thing that might motivate some people to pay attention to climate change. We had discussed the disease in the context of my Coffee Bellwethers TED Talk, and I decided this article would be a good way to delve further into the topic.

Being a habitual user of open-ended questions, I did not ask them specific questions about the article; rather, I asked the students to write questions that the article led them to ask. Several of the questions had to do with the differences between Arabica and robusta coffees, which BBC reporter Jose Luis Penarredonda dubs "Beauty and the Beast." (From Jeff Koehler's remarkable book on Ethiopian coffee, I have since learned that Coffea arabica is so named because it was so abundant in Arabia in the 18th century that Linneas thought it had originated there. Its name should have been Coffea ethiopica.)

As the BBC nickname suggests, most people -- expert and otherwise -- prefer the flavor of Arabica, which comprises about 70 percent of world production. Robusta, though, is the hardier plant, resistant to higher temperatures and to many diseases and pests. Robusta can be grown at lower elevations -- which is how Vietnam became the world's second-largest producer of coffee with no real coffee terrain. Robusta also has about double the caffeine of Arabica. As climate changes in coffeelands, we can expect the 70/30 advantage of Beauty over Beast to decline, along with the average quality of coffee as a whole.

Back to the original assignment: One student asked a question that was based on her careful reading of this passage, in which she noticed one word that I had glossed over:


If left unattended, the disease can have dramatic consequences. In the late 19th Century, Sri Lanka, the Philippines, and other countries in Southeast Asia were the major exporters of coffee in the world. In a matter of decades, the disease meant they practically stopped growing it.

The word is "practically," which should have signalled to me that the story I usually tell about Sri Lanka is not quite right. I took a strong interest in the teas of Sri Lanka -- whose former name "Ceylon" is now almost synonymous with the beverage -- when I was working on a book about tea a few years back. Alas, I never completed the book, but in the process I learned a bit about the relationship between tea and climate change, and I even managed to attend a tea hosted by the Sri Lankan Ambassador to the United States. 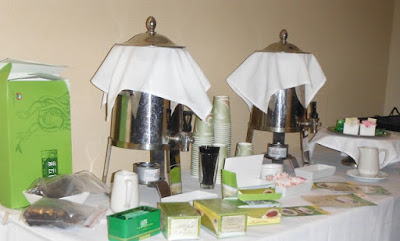 While pursuing that research, I learned about the roya infestation of a century ago that Penarredonda describes in the BBC article. Arabica plantations all around the Indian Ocean and into the southwestern Pacific region experienced the blight, which could only be abated by the large-scale clearing of coffee trees.

Throughout much of the region, Arabica coffee plantations were cleared completely, often replaced with Robusta. In Sumatra, for example, most production today is of Robusta, even though Arabica is produced in limited zones and is well known for flavor notes that are best exhibited in very dark roasts.

It was my understanding that in In Sri Lanka, the removal of all that coffee led to the realization that the island was better suited to tea. And certainly, tea is grown in abundance, with greater volume and variety than one might imagine in such a small geographic area. It employs 1,000,000 Sri Lankans!

And yet, it turns out, there is room for coffee. Although the online magazine Perfect Daily Grind cites a growing cafe culture and the economic importance of production in some parts of the island, Sri Lanka is still so dominated by tea that it is not among the top 70 coffee-producing countries, producing less as a country than my favorite mid-sized coffee estate in Nicaragua.

Still, the growing popularity of up-scale cafés is a trend worth watching.


Posted by James Hayes-Bohanan at 6:52 PM