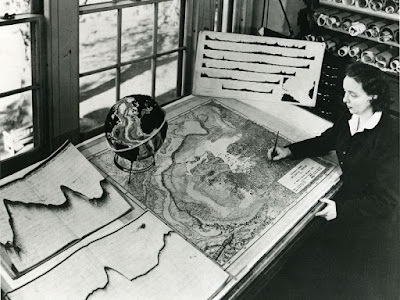 Because I have long been a fan of both biography and public radio, the BBC series Witness has become something that I look forward to most weekday mornings. This 9-minute program comes on at 4:50 each morning, which encourages me to get the coffee grinding done in time to enjoy an interview with someone connected to major historical events.

Careful readers will note that I have blogged about a few of these before; the most recent to get my  attention was an interview with a coworker of geologist Marie Tharp. Her work is central to a lot of my teaching, yet I had never heard of her. In short, it was her careful mapping of seafloor soundings that identified the world's largest physical feature -- the mid-Atlantic ridge -- and confirmed the theory of plate tectonics that had been disputed by geologists for about a century.

The leader of her team -- who was still an undergraduate while she had earned two master's degrees -- had initially dismissed her interpretation of the data as "girl talk" without explaining what he meant by the term. This did not prevent him from eventually putting his name on the publications that announced her findings.

I recommend listening to the interview and then reading Erin Blakemore's Smithsonian article Seeing is Believing, which provides a bit more of the context of Tharp's work. Finally, I recommend Tharp's own account of her education and research. It is posted on the web site of the Woods Hole Oceanographic Institute with the title Marie Tharp, and is based on her own book chapter, "Connecting the Dots."

From her own account of her career, we learn that before earning graduate degrees in geology and mathematics, Marie Tharp double-majored in English and music. A foundation in the humanities is a good basis for continued learning in any field.
Posted by James Hayes-Bohanan at 3:52 PM