This Way or the Highway?

Followers of this blog (see especially my 2017 Unicorn Cult post) and innocent bystanders to my various rantings will know that I am more than a little dubious about the powers of markets to solve problems in the real world.

I was therefore surprised by my own reaction to journalist Kara Miller's conversation with urban-planning professor Michael Manville, in which he offers a market-based approach to the pernicious problem of traffic.

Related links are on the Innovation Hub's blog post for this story.

The conversation begins with laments about traffic from person-on-the-street interviews in Chicago and Atlanta -- two cities in which I have spent hours stuck in their legendary traffic jams and in which it was easy to find ordinary people with extraordinarily strong feelings on the subject. Their discussion includes cogent description of the environmental, health, and economic costs of congestion. It then turns to things that have been tried -- adding capacity, improving public transit, high-density development -- and examples of places that have done these extremely well without putting a dent in traffic.

What to do? Professor Manville argues that congestion results from underpriced capacity. At first this sounds like the nonsense I heard from economists when I first started studying deforestation in the Amazon. The difference is that Manville's argument arises from a carefully defined notion of capacity and a feasible means of adjusting its price; neither of these obtained in the vague free-market pronouncements I was hearing about the Amazon.

His analysis recognizes the importance of a characteristic of traffic that is not obvious from casual observation: the relationship between traffic count (number of cars) and congestion (average speed) is non-linear. Double traffic on a nearly empty road at midnight, and travel time is not affected at all. Double it again, and slowing might be minimal. Eventually, though, traffic will be running at something close to its capacity, beyond which an increase of just a few cars might slow traffic dramatically. Average speeds might drop from 60 to 15 with the addition of just 5 percent more cars. To get a 4x improvement in travel time, we do not need 4x capacity or to remove 3/4 of the cars. Getting just 5 percent of cars off the road at a peak time would be sufficient.

A related insight is his reference to roads as real estate. Driving a car is like renting a moving piece of land measuring about 0.002 acre. We are used to paying rent if we park the car -- maybe the equivalent of thousands of dollars per acre per day. But when the car is moving, we rarely pay rent. And if we do, that rent is the same any time of day.

What Manville suggests is that this rent should fluctuate with its real value -- quite low or even zero when traffic is light, but quite high as a road reaches capacity. He draws compelling comparisons to other situations in which supply is kept available by flexible pricing, and he makes quite a bit of sense. He addresses questions of equity in two ways: first, he points out that there is already a great deal of inequity involved in transportation. It is already much more comfortable to travel as a rich person than as a not-rich person.

Second, he suggests that it is common for the rich who pay premiums for convenience to be subsidizing the poor. This is where the actual application of his ideas should receive the most careful attention. For example, revenue from the peak-time charges could be applied to public transit or to information technologies that would make it easier for average-income commuters to time-shift.

I had my first encounter with this concept in 2016, in a story from my home town, Washington, D.C. This photo was circulating, showing an extraordinary (to my thinking) toll on a toll lane parallel to the public highway my father took to work when I was a kid. 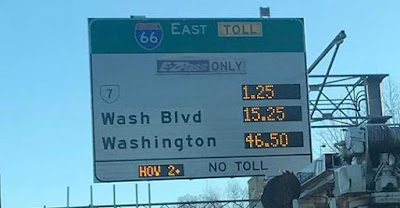 My reaction -- which I posted online -- was mistaken. I assumed that this was a private alternative to the public road, simply a way for the rich to opt out of congestion and for companies to profit from what should be a public service.

This was before I learned the general lesson of reading things more carefully before posting about or sharing them, and long before the more specific lesson of how these are supposed to work. The Washington Post article highlights a couple of key considerations. First, a vehicle with just one extra passenger would pay no toll at all. Second, the tolls are collected by the public agency that managed the highway. Third, the tolls are updated every 6 minutes, providing the dynamism that Professor Manville was proposing, but the price shifts are so dynamic that drivers sometimes swerve out of their lanes at the last minute to avoid them. Causing more congestion.

For this approach to work, it seems, a way must be found for pricing to be sufficiently dynamic while also being communicated in a way that does not yield sudden surprises.

Whatever one concludes about this approach to traffic control, Professor Manville's work -- and his discussion of it with journalist Kara Miller -- are excellent examples of the spatial thinking that is central to modern geography.

Posted by James Hayes-Bohanan at 7:02 PM