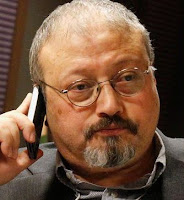 Jamal Khashoggi of was a journalist working for the Washington Post when he was ambushed and assassinated in the Saudi consulate in Istanbul on October 2. It was immediately clear that the murder was ordered by Saudi crown prince Mohammed bin Salman. It was less clear how the United States government would react.

Almost immediately, the president of the United States began offering alternative theories and excuses, but the evidence that one of his key allies was involved was overwhelming, and his efforts to postpone taking a stand eventually ran out. This happened over the weekend, when the CIA confirmed what we all knew about the killing. The president dismissed, demurred, and finally declared his real opinion on the matter: he simply does not care that his allies killed this journalist. The economic relationship with Saudi Arabia and its alliance against Iran are more important, he said, than the death of this journalist.

To be fair, he is not the first U.S. president to prioritize economic considerations over human rights when it comes to the Saudi royal family and similarly-situated despots. It has been the norm for generations of our leaders, in fact. The difference this time arises from several factors: the extreme cruelty of the killing, the targeting of a journalist, the president's ongoing rhetorical support for such targeting, the abuse of the sanctity of consular spaces, and most importantly the ongoing killing in Yemen.

Saudi citizen Khashoggi was killed because he was critical of the war on Yemen. "Standing with" Saudi Arabia in this context means continuing to condone and support the most egregious war crimes, while again signaling that the killing of journalists will be tolerated by this president.

Further, the economic interests that have clouded the judgment of previous U.S. pale in comparison to the personal financial interests that motivate the current president. The emoluments clause of the U.S. Constitution was written specifically to ensure that the president's first allegiance would be to this country and its values.

Fortunately, members of Congress in both parties have spoken out strongly against the recent statements by president and his Secretary of State, and have rightly pointed to the influence of the odious John Bolton, who always seems to advocate the most dangerous and inhumane course of action. Of course, all of the critics in the president's own party have spoken like this before, and after a single news cycle they have returned to giving the president whatever he wants.

This time it is important to show Congress that the president does not speak for his country on this issue; that we do not stand with the Saudi royal family. For this reason, I have written to my own member of Congress, and I hope others will do the same. Below is the full text of the letter I sent to Rep. Stephen Lynch late last night. Some members are already starting to organize just such investigations; they will need encouragement to keep at it.

I am writing to ask that you use whatever investigative tools you and your colleagues may have available to investigate the involvement of the Trump administration and/or the extended Trump family in the brutal killing of U.S.-based journalist Jamal Khashoggi.

At a minimum, the president's constant verbal assaults on the media may have given the Saudi royal family the impression (apparently correct) that the administration would condone whatever cruelty they carried out on this poor man. It seems also quite possible that some intelligence about Mr. Khashoggi was shared with the regime.

Whether there was any cooperation before the fact, the president has behaved very much like an accessory after the fact of this killing, doing all he could to protect the Saudi royal family.

Today he has asserted that his support for the Saudi regime is about greater economic and security concerns. Given his numerous business connections to the family, this is implausible, and an insult to the intelligence of the American people. I hope you will investigate whether his misplaced loyalty constitutes a gross breach of the emoluments clause of the Constitution.

If the Congress does not confront the president in the strongest of terms, I fear for the safety of journalists both abroad and at home. Five were brutally murdered in my old home town of Annapolis, one credibly threatened in Boston, and more attacked with pipe bombs, all by individuals who believed themselves to be carrying out the intentions of the president. In each case, he has been very reluctant to correct their impressions.

For these reasons, I believe that the Khashoggi case is not only a tragedy and a moral affront, but also an existential crisis for our country. I hope investigations can be pursued vigorously. Meanwhile, I hope that the Congress can make it clear that the country does NOT stand with the Saudi regime.

Thank you for your consideration.