As part of my Africa sabbatical, I have been exploring quite a few works related Mali and its neighbors along the Niger River. The 2006 film Bamako somehow got onto my list, and by the time the DVD arrived from Netflix, I had forgotten exactly why. Seeing the title, I assumed it had something to do with the music festivals for which that city was once known.


This impression was reinforced by the opening scene in which Senegal-born actress Aïssa Maïga portrays the lounge singer Melé, but I soon realized that this would be a very different sort of film than I expected. The film takes place in a wide courtyard near her family's home, and intertwines local and global stories of dysfunction. 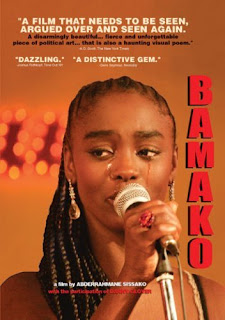 While a tragedy involving Melé's husband unfolds, characters walk back and forth through some sort of legal proceedings. The exact nature of the legalities are not revealed until almost a full hour into this two-hour film; the audience becomes aware only gradually how the trial connects the lived experience of Africans with the policies that shape that experience from very far away.

The film has several valuable soliloquies, delivered both by African and European speakers. Each is a well-crafted indictment (or in one case defense) of the status quo that should be heard in its entirety. The best single line comes during closing arguments:


"We cannot throw Paul Wolfowitz into the Niger (River). The caimans (alligators) wouldn't want him."

I recommend seeking the DVD from Netflix or Amazon, as I do not know of a legitimate streaming source. At least at the moment, however, the entire film is on YouTube.

Posted by James Hayes-Bohanan at 1:28 PM