Early in my Africa sabbatical, I spent about 15 minutes going down the rabbit hole of the eponymous 1981 song by Toto. I reemerged quickly, but the song is still with me, consarnit! In a undoubtedly vain effort to stop it from playing in my head before I board a plane to Africa next month, I'm returning to that rabbit hole for a bit, this time bringing along any willing readers.

After all, if a serious public intellectual like Meghna Chakrabarti can devote 26 giggling minutes of her show to the questions raised by Weezer's unfortunate cover of the song (and the Twitter campaign that made it inevitable), I can justify a couple hours delving into some geographic considerations.

This Radio Boston program aired in August 2018, just before I was to teach  GEOG 388 -- Africa: People, Resources, Development for the first time. Because I somehow ended up teaching the course before the sabbatical in which I would plan the course, I grasped at more than a few straws for content, and playing the original music video on the first day was one of these straws.

I did so by waying of highlighting the fact that in the United States Africa exists primarily as a vague cluster of stereotypes, rather than the world's second-biggest continent. The original MTV video has two things to recommend it: is set in an imaginatively-staged library and it features a globe. Its connection to Africa is in the form of overworked and disjointed tropes.

This may be seen as ironic -- just as Carly Simon's "You're So Vain" was explicitly not "about" its subject, so too "Africa" has nothing to do with the place it names. The irony is celebrated by Namibian artist Max Siedentopf, who is -- as you read this -- playing "Africa" in Africa. Specifically, he has installed an armored, solar-powered, omni-directional speaker system that plays the song on infinite loop in an undisclosed location in the tractless Namib desert. He chose the oldest desert in the world, and though it is not as big as the Sahara, its very name means "vast," so that Toto has a good chance of playing for years without being heard.

BBC's report on this installation is what started me down this rabbit hole back in January, starting with a link to another BBC article about the surprising endurance of the song and its malleability into memes and parodies. By hiding the song in plain sight in a tangible but unknown place in Africa itself, Siedentopf in part reclaims continent's ownership of its own discourse. He disrupts -- or at least interrogates -- the problematic imbalance between the narrator and the periphery that is "down in" his subject.

It was from the reporting of Meghna Chakrabarti that I learned that "Africa" is an exemplar -- perhaps the exemplar -- of something known as yacht rock, a genre whose name derived from an internet television program produced only after the genre had been put to rest. Catchy tunes and vacuous lyricare hallmarks of yacht rock. This explains the longevity of a song that nobody can -- or even tries to -- explain.

Coming the lyrics for geographic meaning, I find nothing more significant than a weak metaphor involving Kilimanjaro. I am still likely, however to play this song on opening day of my next GEOG 388 section in September.

In my "research" for this post, I learned of the existence of this artifact, an Africa picture disk (or disc). Rather than plunking $275 to buy one for a phonograph I no longer own, I tried to share a virtual version. Revisiting this post in 2022, I found it has been removed on copyright grounds, so to recreate the effect, you can play the song with a link above and spin your computer while looking at this picture of the picture. 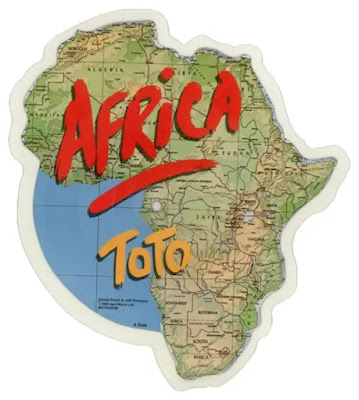 A Bit of Perspective
A friend and colleague from South Africa shared a 2018 article -- originally published in Rolling Stone -- that attempts to make sense of the strange popularity of the song. Rob Sheffield's insight is best captured in his use of the phrase even by clueless eighties standards. It is a song about placelessness, literal and metaphorical.

And finally (for now) ...
I have returned to this post at the end of 2022 because a friend just shared the following silliness. 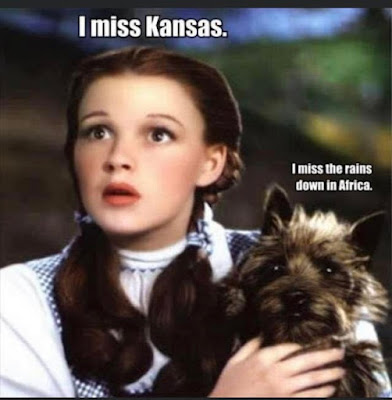 Posted by James Hayes-Bohanan at 11:14 PM