Not So Long Ago 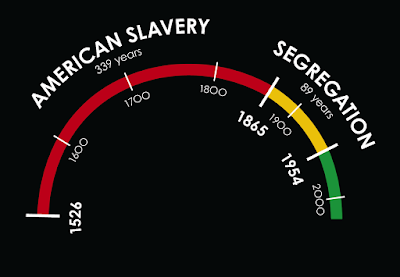 The image above has been circulating online this year. If someone can tell me the original source, I would love to add a citation. I could spend the rest of this week commenting on it, because it relates to so much of what is wrong in the United States today. I will, in fact, no doubt be editing this post.

But for now I am using it to refer to one of the many ways in which the "get over it" response to racial injustice is wrong: the practice of redlining. I have heard the term for many years, but learned only recently that maps were published with actual red lines on them. The importance of this practice is included in a PowerPoint file posted by Shane Wiegand for the Landmark Society.

More specifically, a digital atlas of such maps has been published as Mapping Inequality by the University of Richmond. This is a very important resource that details the practice and allows users to see how specific urban neighborhoods were characterized for the purpose of lending authorities during the 1930s. It is impossible to suppose that such stark definitions of desirable and undesirable neighborhoods could be without consequence today.

Posted by James Hayes-Bohanan at 1:44 PM

Email ThisBlogThis!Share to TwitterShare to FacebookShare to Pinterest
Labels: GEOG199