I have lived in many parts of Turtle Island:

These are the original inhabitants of all of the places I have resided in the United States, known by their current names (in reverse order of my time residing in each):

I highlighted in blue the names that were familiar to me at the time I lived in some of the places. As a non-indigenous resident of Massachusetts, Ohio, and Arizona, I have been aware of some but not all of the indigenous people of those places. In Arizona, I had occasional indirect contact with Tohono O'odham people during ceremonies, including one to which the public was invited on their reservation land and another that was an ecumenical service at my church there. In Massachusetts, I have had the privilege of much more direct contact and friendship with Wampanoag neighbors and colleagues. 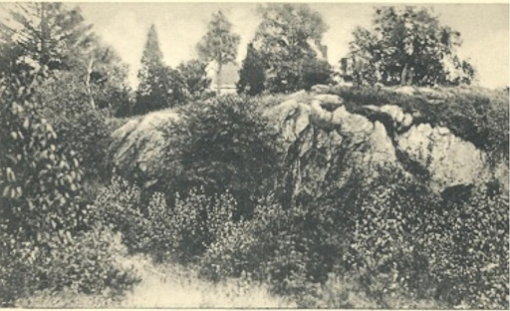 Sachem Rock in what is now West Bridgewater, Massachusetts
In Ohio, the university I attended and the lake where I did my master's thesis were named for the Miami people, but the people themselves had long ago been forcibly removed to Florida (not to the part where the relatively new city by that name is located) and then to reservations elsewhere. To its shame, the university used a slur for its team names, and alumni who will not accept the new Redhawks name can still find the old logo in online stores.
I notice two things about the geography of the indigenous land uses. First,
I found the names of indigenous people associated with each of my homes by sending the common names by text to 907-312-5085. More information, caveats, and a Facebook Messenger option are posted on the Land Acknowledgement page established by Code for Anchorage (Dena'ina Elnena).
Posted by James Hayes-Bohanan at 10:32 AM