I am fortunate to row often -- usually more than once a week -- in the waters of New Bedford, Massachusetts. Sometimes this is in the ocean waters of Buzzards Bay or in Clark's Cove, but most often in the harbor formed between New Bedford and Fairhaven by the wide mouth of the Acushnet River. I often refer to harbor rowing as "inside" rowing because it takes place behind the protection of the New Bedford - Fairhaven Hurricane Barrier, by some measures the biggest structure of its kind on the planet. At 20 feet, it provides protection to both of the municipalities for which it is named and in extreme cases, for craft of all sizes that are kept -- sometimes just for the duration of a storm -- within its rocky embrace.

This makes the harbor a great place to observe ships resting between nautical ventures of work or play. We see refrigerated vessels carrying fruit, pleasure craft both ordinary and exceptional, barges and tugs engaged in decades-long cleanup efforts in the harbor itself, and of course the fishing boats that make this the most highest-value seafood harbor in these United States. 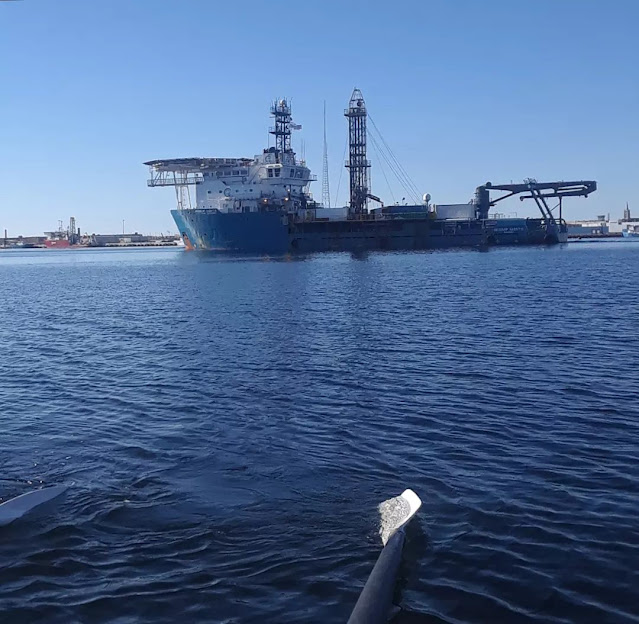 For the past several years, we have seen a whole new category of ships: a growing assortment of survey vessels -- a general term I use (somewhat correctly, I hope) for the ships that are berthed in New Bedford between periods of work offshore. The one photographed above started showing up just in the past few months. It is blue in color, huge in size, and features an enormous helipad (above the stern, which is left in this photo) for landing supplies when it is far from any harbor.  One of its towers is for pushing communication equipment as far above the horizon as possible. The other -- in the center of the ship -- is for drilling into the sea floor for survey and construction purposes. A geology colleague of mine spent a few months in the Indian Ocean on a vessel that was similarly equipped; I greatly enjoyed his stories.

On the first weekend in December, my spouse and I decided to take a long walk -- part of our ongoing preparation for our upcoming Vermont Inn to Inn Walk and an excuse to perhaps get a better view of some of these vessels. We checked a tide chart and parked our car on Rodney French Boulevard near the end of the Hurricane Barrier Walk, about an hour ahead of low tide. As the satellite image reveals, there is a sandbar connecting the hurricane barrier to Palmer Island. At high tide, there is just enough water for a skilled steerer and crew to guide a whaleboat through this gap; at low tide, we can walk. I later learned that it is generally walkable for a four-hour window around low tide, but I am a cautious sort, so we timed our walkabout such that we would be on the island for just the middle hour of that window.

The walk afforded us a view of another of these engineering vessels, the Dina Polaris. 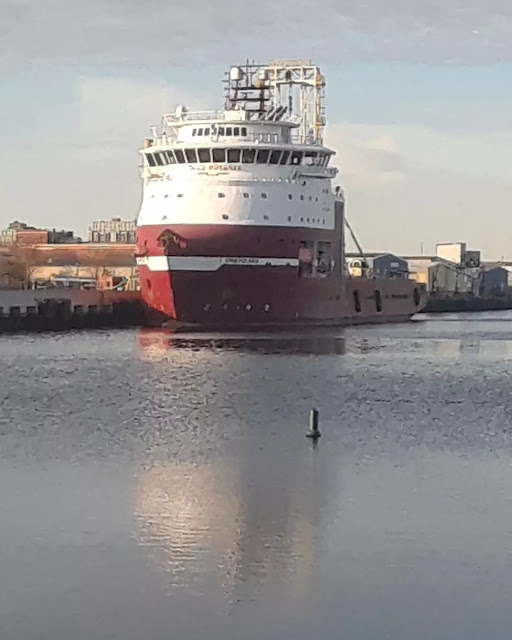 The scale of the effort involved in developing offshore wind turbines is remarkable. Both the wharf and a deep channel have been built specifically for these ships, so that they can provide research and construction support for very large wind turbines being placed on the south side of Martha's Vineyard. The property was used for metal recycling during a long pause when the original Cape Wind project had been abandoned and Vineyard Wind was not yet underway.

See the Vineyard Wind company site and an April 2021 news story for much more detail about the project.

As we walked around the island, I looked for remnants of the hotel/brothel that had been there decades ago, but did not see any sign of the foundation. We did, however, have a nice view of the lighthouse and nearby osprey nest. We would not have walked this close to the osprey platform during nesting season. 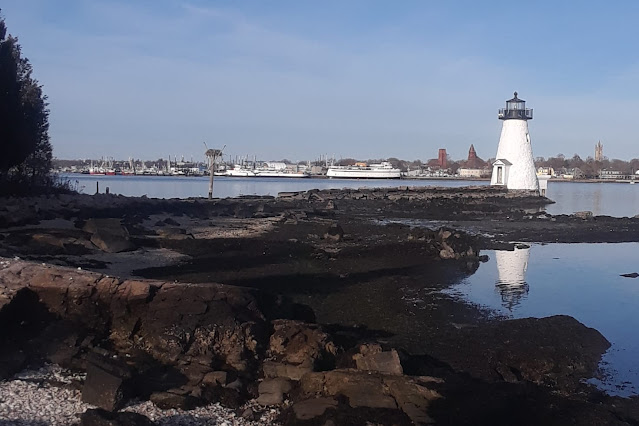 A few weeks after our hike, my fellow rowers and I started to notice some additional vessels, including a bulk carrier that I can only describe as humongous. The Oslo Bulk 8 measures 354 in length. The lifeboat stored above the stern looks like an amusement-park ride to me. We are not certain what this ship is used for, but it seems to me making regular passages from Limon, Costa Rica to New Bedford. I have been in Limon, where I saw thousands of containers of fruit ready for export, so I am going to be trying to find more information about the use of this vessel. 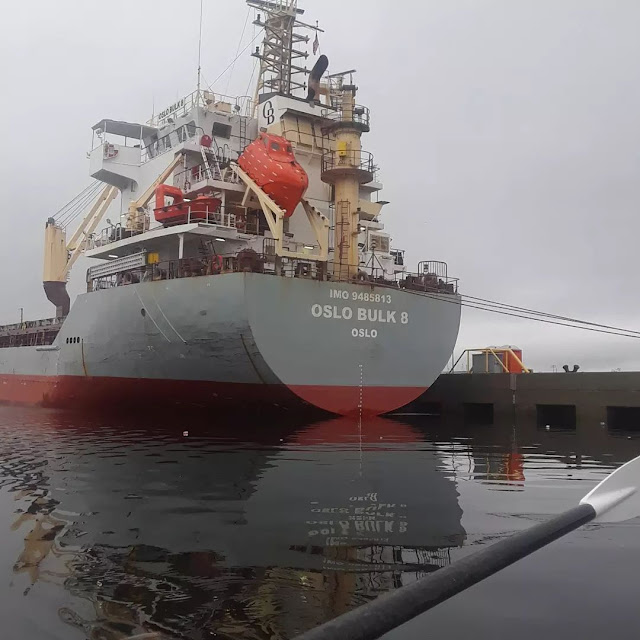 Update: While I have had a number of tabs open for this post, the Baker administration has been working toward even greater expansion of offshore wind. Read WBUR's update of December 17, 2021 for details.

And further update: This story will continue to evolve and will warrant separate new posts in the coming year. It will also be a major part of my summer course New Bedford: Maritime City if I am able to offer in in 2022. The latest update (as of January 2022) is New Bedford says wind boundary changes just a start, which describes ongoing efforts to accommodate the commercial fishing industry as the wind farm develops.

Posted by James Hayes-Bohanan at 4:33 PM