In a recent episode of Fresh Air, co-host Dave Davies interviewed journalist Oliver Milman, whose reporting for The Guardian led him to write the new book The Insect Crisis: The Fall of the Tiny Empires That Run the World.

The subtitle is a good summary of the 40-minute interview, which is nevertheless worth our attention. Milman piqued my interest when he described what a world without insects would be like; he credits the recently deceased ecologist E.O. Wilson -- whom I mention many times on this blog -- with some rather grim ways of describing just how empty our world would be without insects. He then describes some of our dependencies in detail, along with some interesting ways in which the sharp decline of insects is being documented. He offers some small glimmers of hope, because modest changes in human habits have been shown to benefit insects greatly. They require our attention, though.

From the beginning, this discussion reminded me of the work of an earlier biologist about whom I have written even more on this blog: Rachel Carson. After all, her landmark 1962 book Silent Spring derives its title from a grim, quiet scenario in which birds are no longer present. Her focus was birds, but she described their endangerment in the context of human attacks on insects.

Silent Spring did lead to some softening of those attacks, but as Milman makes clear, human activity continues to threaten these essential creatures in many ways, both deliberate and accidental.

The insecta class has persisted for 400,000,000 years, through several mass-extinction events. We have an opportunity -- and responsibility -- to ensure that a brief century of human "progress" does not prove to be their undoing.

I was heartened to learn -- just a day or so after hearing the story above -- that an unusually large bee had been found in Indonesia, four decades after its presumed extinction. The rediscovery of the enormous Megachile pluto resulted from a very deliberate search that followed a rather accidental discovery of its nests.

This part of the story exemplifies the attention to detail that has always fascinated me about entomologists. I used to go hiking and camping a lot with a friend who had studied entomology before becoming a geographer. (We did all of this travel in his VW Bugs, but that is another story.) Countless times, I would be walking along in almost complete oblivion to my surroundings when he would stop, gasp, and gesticulate wildly toward a smudge on a branch or fencepost or a bug that looked like all the other bugs to me. Invariably, it was a highly unusual bit of insect nest or food, or a bee disguised as a wasp disguised as a bee. 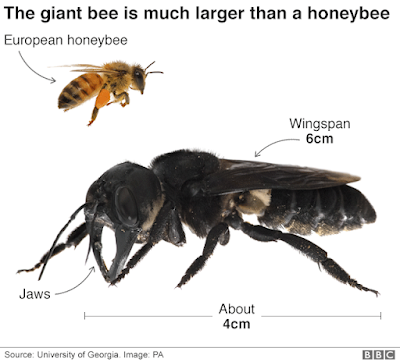 I hesitate to post this, because it is a hopeful anecdote that does negate the more systematic findings about the precipitous decline of insecta as a class. But we will take encouragement where we can find it, as we continue to work for the protection of all the remaining critters and the ecosystems of which they are a part.

Posted by James Hayes-Bohanan at 12:14 PM