But this post is not about the Amazon -- it is about the Nile, because my favorite librarian and I decided to watch the series in order, and it begins with what is commonly thought of as the longest river, followed by the other top contenders: the Amazon and the Mississippi. It so happens that we watched the Nile episode on the same day that our EarthView team had been showing our giant floor map of Africa to some delightful second graders. I had been spending quite a bit of the morning looking at the Nile and its tributaries -- especially when the last group decided that they would ALL use their feet to measure the river!

While looking at the big print map, I remember looking at various headwaters areas, and noticed for the first time that one of the tributaries near Lake Albert is called the Albert Nile. I learned a lot of geographic details from the PBS program that I wish I had known to share with the kids, and that I hope I remember next time! Two of these are that the Nile stretches from the equator to more than 30°N and that Lake Victoria is the world's largest tropical lake. The program and I both point out that the Nile -- like virtually all rivers -- has more than one source. 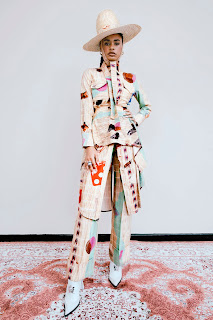 I recommend watching the show as I did -- with a laptop handy, open to Google Maps. I will be doing this for all of the remaining episodes. Among the most interesting things I learned this way is that some of the river's major tributaries pass through areas that are either so narrow (rocky gorges) or so broad (marshy wetlands) that they really do not appear as rivers on satellite imagery.

All of this was in mind -- especially some questions I had about Lake Albert and the Albert Nile -- when I heard a story about a project of post-colonial reckoning at a London museum. More specifically, the Victoria and Albert Museum -- named for two leaders in the colonial subjugation of the continent -- has launched an exhibit that highlights post-colonial African fashions. As the museum web site describes the exhibit, "Africa Fashion explores the vitality and global impact of a fashion scene as dynamic and varied as the continent itself."

At right, from the exhibit:

On the western side of the continent, by the way, I told a couple of stories about the brilliant and fabulous singer Angélique Kidjo. I showed them her home country of Benin and described her anthem Afrika (which I heard her perform in Providence in early 2020) and the ballad Iemanja, which was my introduction to her beautiful and multilingual body of work. 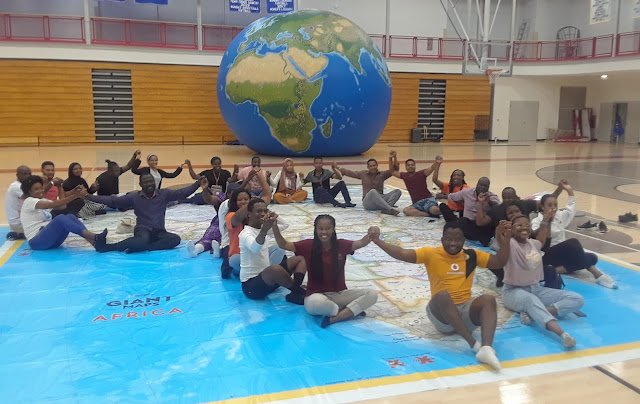 Posted by James Hayes-Bohanan at 11:32 AM