Ben Linder connections at Hofstra and University of Oregon

I am posting today from the campus of Hofstra University on Long Island, where my favorite librarian is doing some research. Just hours before leaving for this jaunt, we learned of a connection between Hofstra and the family of Benjamin Linder, for whom we have proposed to name a new cafe at Bridgewater State College.

While showing the documentary American/Sandinista to a community group Wednesday night, we noticed something we had not previously: Benjamin Linder's mother Elisabeth spoke in Hempstead, New York a few months after his death. Before making the trip, I was able to learn that her July 1987 visit to Hempstead  did indeed include the Monroe Lecture Centre at Hofstra (where I am pictured below). It also included a meeting with Salvadoran refugees at another location in the town. 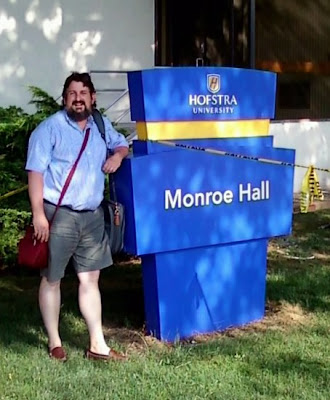 Unfortunately, because the visit was during the summer, university archivists -- who searched diligently -- were not able to find any documentation of the visit, though they did very helpfully  provide some other leads that I am pursuing, in order to learn more about the visit.

Interestingly, during this search I also discovered that the University of Oregon actually has a lecture hall named for Ben Linder. Incredibly, just as I was doing that research, a supporter of the BLC project  contacted me from a visit that university to tell me he had just learned the same thing. Stay tuned; the two of us are trying to find out more about how that naming took place. What we know so far is that a commemorating event took place on the 2008 anniversary of Linder's death and that the lecture hall has two portraits, though little educational information.

Stay tuned, and please share information about any other colleges or universities with Benjamin Linder events or installations of any kind.

Posted by James Hayes-Bohanan at 11:27 AM