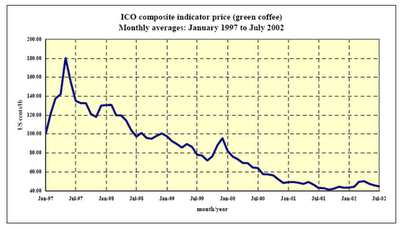 Graph from full report at http://dev.ico.org/documents/globalcrisise.pdf

A lot of my teaching and writing about coffee has its roots in the coffee crisis, which was a world-wide collapse of coffee prices that took place about a decade ago. The International Coffee Organization (ICO) web site includes a Coffee Crisis page that includes its reports and testimony to various multilateral conferences. The first of these, presented to the World Summit on Sustainable Development in 2002, provides a good introduction to the crisis.

Over a couple of years starting in 1999, the prices paid to coffee farmers fell dramatically, even as spending on coffee in rich countries increased. Tens of billions of dollars flowed into the industry, but the 2-percent share earned by farmers actually fell by fifty percent or more. In many countries, the decline in the earning power of coffee more than offset the total value of all international aid. It is a twisted irony that one cause of the crisis has been the increased production of coffee (especially in Vietnam) as a pre-condition for such aid.

By 2001, the financial collapse of both large and small farms displaced tens of thousands of coffee farmers in Nicaragua, many of whom walked from the producing areas in the north all the way to their state and local capitals in search of some assistance -- people died and others were born during those marches. I have had the privilege of meeting some of the farmers and of visiting the stretch of the Pan-American highway that was shut down by their protests. The activities did draw international media attention and some short-term humanitarian aid.

The on-going crisis is both a humanitarian problem and a global security problem. The displacement of millions of rural workers and landowners has been a major driver of out-migration from coffeelands to cities and across international borders; it has also drawn new producers into the growing of illicit drugs of all kinds. Since most drug-producing plants are annuals while coffee is a perennial, conventional eradication programs are counterproductive in coffeelands.

Although nominal prices for Arabica coffee have returned to pre-2000 levels, in real terms producers are they are still far below the costs of production, even when fair-trade premiums are paid. The crisis is merely an extreme variant of a structural problem that economists Raúl Prebisch and Hans Singer demonstrated around 1950. In contrast to the free-trade theory of comparative advantage, the Prebisch-Singer Thesis recognizes that the value of commodities falls relative to the value of industrial products, so that countries on the periphery that rely on commodities will inevitably suffer declines in terms of trade. For coffee growers favored by geography, ingenuity, and good luck, specialty coffee provides the possibility of moving out of the commodity model.

Posted by James Hayes-Bohanan at 4:41 PM