Last week was the 390th anniversary of the pilgrims arrival in Plymouth, Massachusetts. On the same day, a long-awaited announcement from Washington highlighted some interesting connections between the city of my birth and my adopted home state. The announcement from the Bureau of the Census is likely to keep political geographers -- and geographers in several other specialties -- busy for the coming year or two. The Bureau of the Census operates continuously, employing quite a few geographers in pursuit of its mission of serving "as the leading source of quality data about the nation's people and economy."


Its original purpose, however, is the one for which it is best known: Article I, Section 2 of the U.S. Constitution mandates that an enumeration be conducted within the first three years after the Constitutional Convention of 1787, and once per decade after that. The Constitution specifies the original apportionment as follows:

The main purpose of the 1790 census was to reapportion these seats according to population, with each state to have at least one representative (in addition to its two senators), and no more than one representative per 30,000 residents. (The Constitution even stipulates how people were to be counted, with free or indentured citizens counting  as 1.0 each, Native Americans as 0.0 each, and slaves as 0.6 each.) If the 1:30,000 ratio were still in place, we would have ten thousand representatives in Congress, instead of 435.

Following each census from 1790 to 1910, Congress not only reapportioned its seats, but also expanded the total number, so that by 1910 about 210,000 people populated an average district. Today that number is 710,000, though districts in smaller states may range from just over a half million to just under a million. Boston Globe commentator Jeff Jacoby has made an interesting argument in favor of expanding Congress, if not to the original ratio, then perhaps to the ratio that was in place in 1910. This is an unusual position for Jacoby to have taken, as he usually argues against any expansion of government, but his case does have some merit.

Incidentally, the secondary purpose of the censuses from the Founding until the passage of the 16th Amendment was to apportion the tax burden for the federal government. It was originally supposed to be levied on each state, in proportion to its population. This provision was removed when the individual income tax was adopted.

The big news last week was that the Bureau released not only the population count, but also its determination of what impact this would have on Congress. As the map below shows, several of the places I have lived are affected by yesterday's report: Massachusetts, Ohio, and Missouri will be losing representatives in Congress, while Texas and Arizona will be gaining. (My old homes in Maryland and Virginia will not be affected, and of course my birthplace of Washington, DC has taxation but no representation.)


The map comes from an article about the count by Chris Cillizza on his Washington Post political blog known as The Fix, where he promises to follow this story over the coming months. The article leads with the observation that the shift of seats is, generally speaking, from so-called blue states to red states, meaning states that tend to vote for Democrats and Republicans, respectively. Cillizza goes on to explain that it is not quite so simple, mainly, he writes, because Republicans already have such large advantages in these states. In fact, those advantages are generally tactical, rather than demographic; the red state/blue state dichotomy is somewhat exaggerated, as Robert Vanderbei's Purple America maps illustrate. Clearly, there are some regional differences, but most states are much closer to 50/50 than is generally realized. The redistricting process -- described in more detail below -- simply makes it possible to turn small demographic advantages into decisive political majorities.

Each state legislature sets the geographic boundaries of districts, and beginning in 1812, many legislators have attempted to draw them in ways that favor the leading party at the level of each state. The connection to my adopted state of Massachusetts is that this was first documented on February 11, 1812, when Massachusetts Governor Elbridge Gerry (pronounced "Gary") protected his political allies by creating a district that was immediately lampooned for its salamander-like shape, thus coining "Gerrymander" as a synonym for politically-motivated mapping. The district's sinister appearance in political cartoons did not, however, shame the governor or the legislature into abandoning the transparent maneuver.


The original amphibian that evoked such ridicule in 1812 would hardly be seen noticed two centuries later, as the process has become ever-more sophisticated. The U-shaped Chicago-area district below is featured in the 2010 documentary film Gerrymandering. I have not yet seen the film, but Witney Seibold's review is a nice description of the movie and of the threat the process still poses to our democracy. The two arms of the U shown below are joined by a tortuous, winding strip of vacant and near-vacant lands that could not in any meaningful way be considered a "district" or "neighborhood." 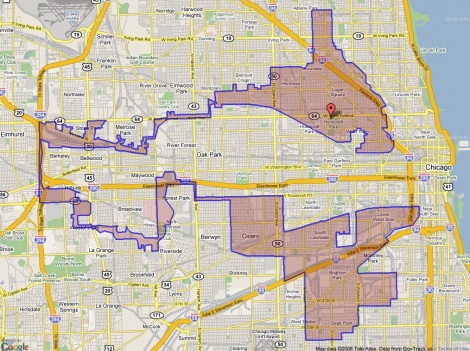 Although Texas -- a "red" state -- will gain four members of Congress and its majority-Republican legislature will do its best to capture all of them, it will probably not succeed in gaining all four. The Fix blog provides  a detailed update on the prospects for shifting seats in Texas, which has already undergone incredible efforts at political districting. In Decision Day for American Democracy, blogger Dave Pollard described what was at stake as litigation from the 2000 Texas redistricting made its way to the Supreme Court. The redistricting that took place between 2002 and 2004 illustrates the shamelessness with which legislators will isolate political and ethnic minorities. Precincts in the southern part of the Austin metropolitan area were joined with my former neighbors in west McAllen, 250 miles to the south, while the district in eastern Austin was extended about 100 miles toward Houston to offset the loss. The fact that such extreme measures have already been taken, however, makes it unlikely that even the most shameless and ambitious redistricting plan could gain much more for the Republicans.

Because politics is both a passion and a pastime in Massachusetts, the airwaves are currently full of reviews of this political year. The wrap-up discussion on Radio Boston concludes with an interesting suggestion. For more than a decade, Massachusetts has had two Democratic senators and ten Democratic representatives at the federal level (aided, no doubt, by supermajorities in both houses of the state legislature). With the election of Republican Scott Brown to fill Senator Kennedy's seat, "only" eleven of the state's twelve federal legislators are Democrats. The Bay State is losing one representative, creating the prospect of pitting two incumbent Democrats against each other. During the program, it was suggested that redistricting could be done in such a way that nine incumbents remain in place, with the tenth pursuing Sen. Brown's statewide seat, for which he needs to run again in 2012. Meanwhile, the Boston Globe ran an editorial last Thursday in which it calls for a clean redistricting process that would involve an independent commission. The editorial reminds readers not only of the original skullduggery of Elbridge Gerry, but also the more recent federal conviction of  Massachusetts Speaker Finneran, who lied about the process the last time districts were redrawn. Open discussion of how to protect incumbents suggests that the Globe's suggestion is not at all likely to carry the day.

Posted by James Hayes-Bohanan at 9:30 AM