Toward the end of the time we lived in the Rio Grande Valley of Texas in the mid-90s, we learned of a South Texas musician named Tish Hinojosa. (Actually, she was from San Antonio, about 250 miles to the north of us, where the core of Texas meets South Texas.) We learned that she had just played at a local festival in Harlingen, and that we really should have been there.

Over the years since then, we bought several of her CDs, and nearly wore out Cada Niño/Every Child when our kid (formerly known as Paloma) was young. We love Taos to Tennessee, which really exemplifies Hinojosa's position at the exact midpoint between the country music I grew up with and the Latino music I most enjoy as an adult.

I knew that we would love to see Tish some day. I did not know that my wonderful wife -- and fellow Latin Americanist -- Pam was checking online periodically for the chance to make it happen. A couple of months ago, she announced that she had found a listing for Tish at the Club Passim in Cambridge. This is a coffee house that has brought great performers to small audiences for a half-century, like our own Off the Common but a bit more famous! I was delighted that we would have a chance finally to see Tish and learn more about her work and life. 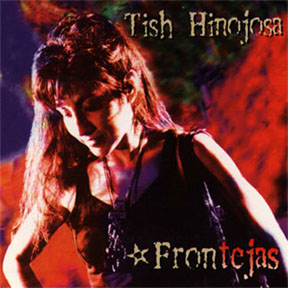 When we arrived at the club this past Tuesday, we saw just how small the tables at Club Passim are, meaning that our second-row seats were practically on stage with Tish and the amazing Marvin Dykhuis. What Tish is to poetry and voice, Marvin is to guitar and mandolin. He is a big Texan who can make a tiny mandolin sing, and he was the perfect accompaniment to the fluid vocals of Tish Hinojosa.

I remember that at the David Byrne show in Boston a couple of years ago, there was some tension between the audience and the artist, as he wanted to play his newest material and we were all there for our old favorites. A friend tells me Van Morrison goes even further, almost never playing crowd-pleasing oldies. I was wondering how this dynamic would play out with Tish, as she -- like Byrne -- plays in a lot of different genres to begin with, and has a (relatively) new CD that was unfamiliar to me.

I should not have worried. Tish played old favorites from across the spectrum of Spanish ballads, Tex-Mex conjunto, and country-western. She did play quite a bit from her newest album, which immediately became a favorite. The song "Mi Pueblo" (My Town) from the 2008 Our Little Planet hit a strong emotional chord and made me think, "I could teach a whole course with this music." As I told Tish during intermission, I use a lot of Latin American music in my teaching, including hers. "Mi Pueblo" will be perfect for my geography courses, as it beautifully describes the longing for familiar landscapes that is experienced by people who migrate far from home in order to work. It is a theme that recurs several times on this magnificent collection, which reminds us both of the distinctiveness of places and the fact that the whole world turns under the same sun and moon.

On the ride home, listening to our new favorite CD, Pam said that this concert would end up costing us a lot of money, because now we have to buy all the rest of Tish's work. It will be money well spent, though; we are happy to support an artist with such grace and insight!

See my 2017 Donde Voy post for more about the beautiful and important music Tish Hinojosa continues to make.

Posted by James Hayes-Bohanan at 12:29 PM

Email ThisBlogThis!Share to TwitterShare to FacebookShare to Pinterest
Labels: musica