Annual coffee consumption in the United States is close to ten trillion beans per year (1.3 million metric tons with about 3,500 beans per pound) -- more than any other country. Brazil is a close second in total consumption, but neither country comes close to the top in per-capita consumption: the average person living in the Nordic countries consumes coffee at 2-3 times the U.S. or Brazilian rate!

Based on a World Resources Institute report, the interactive map of coffee consumption is accompanied by a detailed chart. The details allow for any number of interesting comparisons. (The map below is a static screen capture.) At indexmundi, I found a ranked list of producing countries. Comparison between the two is complicated by the difference in units used (tonnes versus bags), but may be nonetheless intriguing. 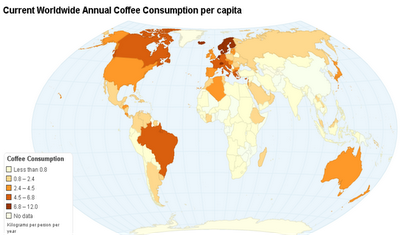 Posted by James Hayes-Bohanan at 6:42 PM