Many thanks to my friend Bryan for keeping me supplied with interesting maps -- such as the "Mean Map" I posted earlier this month. The latest is from a November 2010 blog post by Kent State geographer Andrew Shears, who has decided to represent each state with a television series. As he points out, the available choices are far from even. New York and California are default settings for producers who do not think much about place, or who do such thinking without really thinking, as it were. As Dr. Shears (who is to be congratulated on his new PhD!) details, many states leave him with a single choice, and others with precious few. States fortunate enough to have a handful of choices, of course, bring out the back-seat cartographers who will quibble with the choices, as all such lists tend to do.

I will not fall into that trap (at least not too deeply), though I will make a couple of observations. First, I am pleased that of the several choices available for Maryland, Shears chose a series in which my own father-in-law had a role. I've still not seen The Wire, as we've not gotten a copy of his episode. Another good choice for Maryland that would have filled the same condition is Homicide, in which my father-in-law played two different roles: one living, one dead. Several choices ring very true for me -- Alice for Arizona, Drew Carey for Ohio, and the Andy Griffith Show for North Carolina. That show --  and the Waltons (Virginia) -- really capture my rural, southern childhood. 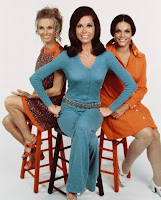 If I were to quibble with any choice, it would be Coach for Minnesota, until I read what Shears had to say about this choice in his blog. As a geographer who has spent several years each in many different parts of the United States, his answer rings true. As I reported on my Celebrating the States entry for Missouri, cultural touchstones are tied both to time and place. Coach represented Minnesota while Shears was growing up, just as MTM epitomized the state when I was in my formative TV-watching years. Apparently Baby Boomers such as myself dominated the feedback Shears received, as his remix map does put Mary Richards in the Land of 10,000 Lakes.
The television mental map actually builds on an earlier post, in which Shears built upon a map of movies by state that had appeared on The Huffington Post. Shears seems to have put more thought and research into his choices than had the earlier cartographer, for example taking Fargo out of Minnesota. In addition to the choices he mapped, he included several interesting alternatives for most states. Readers of Environmental Geography will recall that state-by-state movie choices were integral to the Celebrating the States blog that I co-authored with Pamela Hayes-Bohanan. The main page of that blog includes the films Pam chose for us to watch as part of that project, and the individual postings include her reviews and comments. Although we liked some of them very much, it is by no means a list of favorites!
Posted by James Hayes-Bohanan at 12:06 PM