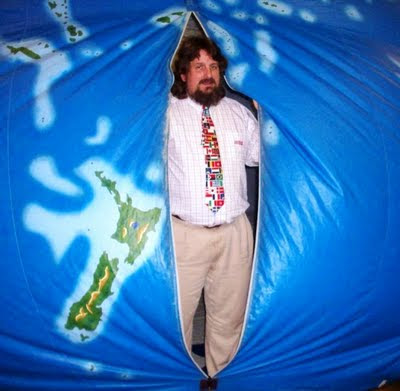 Most readers know that I am part of a team in the BSU Geography Department that takes a giant globe known as EarthView to schools and public viewing events, with close to 30,000 people -- in small groups -- joining us inside the globe in the three years we have had it. EarthView is a hand-painted, physical globe, which means that the only national boundaries that are well-defined on the globe are those of island nations such as New Zealand and Madagascar. Even where boundaries are fairly easy to discern, countries are not labeled, so I have been endeavoring to learn the locations of all the world's countries. This is especially helpful since someone with a doctorate in geography really should know where all the countries are, just as I would expect a "real" doctor to know where all my bones are! And there are roughly the same number to keep track of.

In geography school, though, we do not just sit around memorizing maps, so I actually did not know more than 85 or 90 percent of the locations until recently. A handy tool for improving my performance has been the geography games at JetPunk (apparently the key to naming web sites is to join any two, unrelated nouns with a further unrelated graphic). I learned about JetPunk when I put together my Geography Games page a couple years ago, and recently I have found several of the puzzles quite useful. The first (shown below) gives a user 12 minutes to type the names of 195 countries. Fortunately, many common misspellings are allowed, so it is quite forgiving. As names are correctly entered, each country is shaded on a single map and the name appears alphabetically in one of about a half-dozen clusters. About 20 countries are too small to appear at the scale used, so the map and list work together. 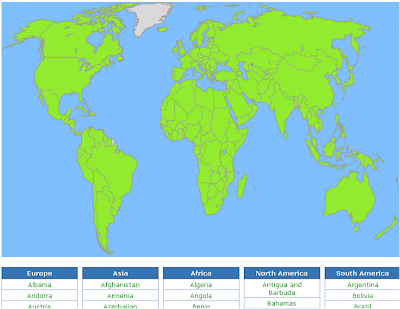 I find several other quizzes on this site quite useful. Each of these is focused on a region -- I have used "Central America" (which includes the Greater and Lesser Antilles), Oceania, and Europe. In each case, I already knew where the larger countries are located, but the game has greatly improved my mental map of the smaller countries.
A comparison of these games with EarthView and other maps leads to some important geographic questions about exactly what constitutes a country. Last autumn, for example, I was very interested in an unusual story from Tokelau, which I thought was a small country in the Pacific Ocean. It turns out that Tokelau -- like many of the planet's small islands -- is actually under the sovereignty of another country, in this case New Zealand. The JetPunk games, incidentally, seem to use United Nations membership as a principle criterion, though membership currently stands at 192, and Switzerland was only added in 2002. A new book from Lonely Planet has a more expansive definition, providing travel and geographic information for 230 countries.
As it turns out, although many of the world's countries are recognized nation-states, in scores of cases the connection between a nation and a state are complex, compromised, and/or contested. Thanks to geographer Matt Rosenberg for drawing my attention to a very interesting world map that highlights some examples.
The Revised Map of Geopolitical Anomalies appears, with a key, on the GeoCurrents blog. The examples on this single sheet could keep a geographer busy for days with quibbles, further examples, clarifications, and disputations! Having other work to do, I will just mention a few items that jumped off the page for me.
First, the key mentions Taiwan as "the most unrecognized state," describing some of the convoluted ways to which other countries sometimes refer to the island nation. I am reminded of Macedonia, one of the countries that emerged from the breakup of the former Yugoslavia. Although widely recognized, objections to the name by Greece Macedonia have led it to be included in the United Nations in the "T" section of the alphabet, as in "The Former Yugoslav Republic of Macedonia."

The map and key refer to several exclaves, which are portions of national territory -- such as Alaska -- that are not adjacent to the "main" portion of their respective countries. France is cited as having the greatest number of exclaves -- accounting for many of those islands in the Pacific whose names and locations I have not yet learned and giving France economic control of many thousands of square miles of ocean. I was reminded, though, that I just learned that one of the newest and smallest countries in the world actually has an exclave.
Timor-Leste -- also known as East Timor -- has belonged to Portugal, the Netherlands, Japan, and Indonesia, finally being admitted to the United Nations as an independent nation in 2002, after the loss of many thousands of lives. I knew that Timor-Leste controlled the eastern half of the island of Timor, but I only recently learned that tiny as it is, this nation has an exclave on the northwest side of the island.
Incidentally, the name "East Timor" is redundant in the same way that "Sahara Desert" is. Just as sahara is an Arabic word that can mean desert, the word timor is Malay, meaning east. One of its previous names, in fact, was Timur Timor.

Posted by James Hayes-Bohanan at 3:58 PM