Q: How do you know you are near the site of a recent moose or deer crash in Maine?
A: You are in Maine, on a road.
We have lived in southern New England for almost 14 years. Moose (Alces alces) live in northern New England, with their range gradually expanding southward. We travel a fair bit, so we expected to have seen one before now. We have traveled in Maine, Vermont, and New Hampshire on several occasions, often venturing out at dusk and in the spring and fall, when moose are said to be roaming. We even spent two days in Algonquin Provincial Park, which is said to have the greatest concentration of moose in the world. We have been warned -- WARNED -- not to joke around about moose. Any bit of carelessness while driving could put us at serious risk of a moose-car collision. There are no winners, as each party is quite dangerous to the other. 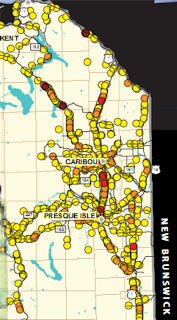 Whenever we drive in moose territory, we half-joke at the warning signs and scour the roadsides for moose, particularly in and near wetlands. Prior to our visit to Bridgewater, Maine last weekend, our reward for all this effort had been a sighting of the tail end of a moose entering the forest (and fleeing a crowd of gawkers) in Algonquin and the disturbing view of a freshly killed moose splayed out over a guard rail near Glen, New Hampshire.

We only half joke about the warning signs, of course, because we know that the threat of collision is real, especially at night. Deep down, we dreaded the possibility that our first real encounter might be calamitous. We were therefore very pleased to have our first good view of a moose in a roadside pond between Van Buren and Caribou, Maine last weekend. (Our hotel clerk assures us there are no caribou in Maine, by the way.) Paloma was able to snap several photos of this lovely girl as she scrounged the bottom of the pond for edible muck. According to the most recent Maine DOT's dot map of collisions with moose or deer, the highway was the site of one or more such crashes per mile along this stretch between 2005 and 2007.

The dot map is part of MDOT's most recent moose-safety poster, which also includes the choropleth map below. Whereas the dot map shows that the greatest density of moose collisions is in south-central Maine, the choropleth map is normalized for traffic flow, and indicates that the risk per mile driven is far higher in Aroostook County. The poster is one of many educational and statistical products available on MDOT's safety page, which is entirely devoted to vehicle-animal crashes.

Several factors combine to explain why moose-car collisions have become so common, even as observation of living moose remains elusive. Expansion of agriculture pushed moose out of most of New England several hundred years ago, as roughly 80 percent of forest was converted to cropland. The eventual abandonment of agriculture once again created favorable habitat for moose, and occasional clearing for timber made their return easier and earlier in the far north of the region. By the 1970s, however, moose began to reappear in north-central Massachusetts where about 900 are thought to live now. The shape, size, and habits of moose make them particularly vulnerable to cars (and vice-versa), as explained on Mass Wildlife's Living with Moose page. Learn more about moose in other parts of the Northern Hemisphere from Mooseworld.

Posted by James Hayes-Bohanan at 9:05 AM