In January, I wrote about Tom Ashbrook's interview with Carl Safina, author of The View from Lazy Point: A Natural Year in an Unnatural World. We are reading the book together now; it is a beautiful telling of some ugly truths. For example:


"Formerly, whales were the world's wells, civilization's chief source of oil, and we pumped the sea nearly dry of them. Now many wish to pump it dry of petroleum, incurring deeper risks at deeper depths (and not just in the Gulf of Mexico). We appear to have leanred little of whales and nothing of oil. Japan, Norway, and Iceland cannot get beyond their blood thirst, nor we our oil addiction. The average Yank uses twice as much fossil fuel as the average Brit. Compared to 1970, we in the United States use half again as much energy, have increased our paved-road miles by half again, upped our vehicle miles driven by more than 175 percent, and increased the size of our new homes by half again. In 2007 the United States was burning over twenty million barrels of oil a day, about the same as the industrial behemoths Japan, Germany, Russia, China, and India -- combined. God bless us indeed." (p. 83)

We have the advantage of hindsight with regard to the decimated stocks of whales and their oil. Sadly, as Safina indicates, our oil addiction has made the most obvious explanations suspect. Peak oil is denied, while people blame high fuel prices on every short-term cause that comes to mind. Clearly, just as regional oil fields have reached their peak and entered decline in many places, so too has the global oil supply. 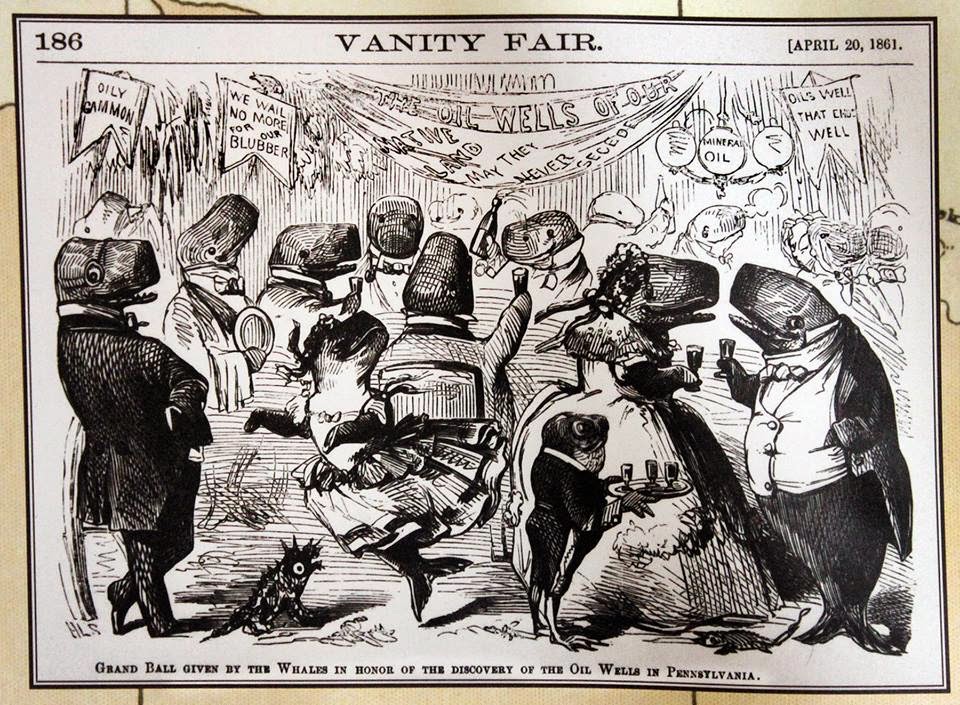 ROCK OIL vs WHALE OIL (courtesy of New Bedford Whaling Museum, August 27, 2014)- 155 yrs ago today, Col. Edwin Drake struck oil at 69 ft. in a well he was drilling near Titusville, PA for a group of Connecticut investors who had hired him to prospect for petroleum, then called 'mineral oil' or 'rock oil' because it flowed from the earth and not from whales. Drake's well proved prospect drilling successful. It was the beginning of the end for whale oil. This 1861 cartoon depicts whales celebrating the new era, which changed the world and made countless fortunes. But Drake died a poor man, living on a small pension in later years.

Posted by James Hayes-Bohanan at 9:48 AM