One of the blessings of not having television in our house is that I am blissfully unaware of most developments in fast food and the marketing thereof. Some of the more interesting aspects do bubble up through NPR, though, is did the existence of the KFC Famous Bowl. It was from comedian Patton Oswalt's appearance on the Wait, Wait, Don't Tell Me that I learned of this and several other culinary horrors.

Be advised that Oswalt's language is rather vulgar, but the obscenity of his comedic rant is appropriate to the topic, just as the film Fast Food Nation is rated "R" and the film Super Size Me should be. (Note about how we teach our children: Sporlock's documentary is available in a sanitized, PG version that is called "educationally enhanced," a designation that would make Orwell proud.) 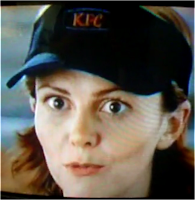 Anyway, Oswalt takes two and a half minutes to describe the experience of ordering the inexplicably named Famous Bowl from KFC and its meaning for the target customer. (That is the real name of the company now, as it got rid of the word "Fried" in order to healthify its image.) It is hilarious, and seems like hyperbole. In fact, however, he actually leaves out one ingredient in this, the most artery-clogging item on the KFC menu, with more salt and fat than one can imagine fitting into a small bowl.

If ever an ad were a parody of itself, it is the original Famous Bowl ad, which is just a shorter, sexier version of the original -- with a wink and some extra cheese. The customer in the ad does not look as pathetic as Oswalt (or I) might, but the wiles of the server leave nothing to chance.

What does all this have to do with the geography of food? Quite a lot, actually, as it is an extreme manifestation of the broader problem of access to healthy food. We may be responsible for our food choices, and as a hard-working, low-income friend of mine has pointed out, with a some effort and awareness most people can find their way to healthy food habits. But the combination of geography and marketing make it more of a challenge than it should be. It is often necessary to traverse both perceptual gulfs and food deserts to get back to anything like real food. (See Feeding America for more information about USDA efforts.)

Posted by James Hayes-Bohanan at 7:04 AM