In the October 24 issue of The New Yorker, cartoonist Emily Flake perfectly captures the angst that has driven many Americans to the streets. The scene she creates resembles those examined so brilliantly in T.C. Boyle's Tortilla Curtain, but populated by a different cast of desperate workers. 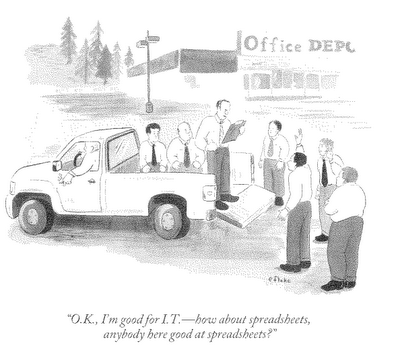 I was reminded of Nigel Russell's "White Collar Holler," the IT chain-gang song made famous by Stan Rogers. As Wall Street speculators and their political allies continue to eviscerate the work force, few have the luxury of complaining about dull work any more.

I see one ray of hope in the reality that Flake's cartoon so eloquently captures. A growing number of working people are beginning to understand that they are ill-served by policies designed by and for the super-rich.

Posted by James Hayes-Bohanan at 8:20 PM