Jockeying for Advantage on Immigration 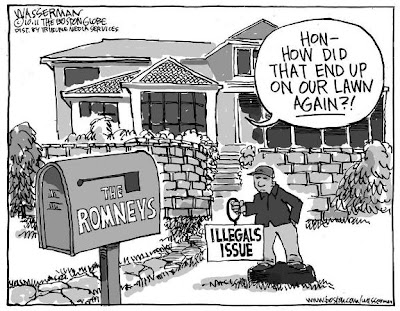 The subtitle of Globe cartoonist Dan Wasserman's "Out of Line" series is "A notebook of graphic disobedience," a distinction that is well-earned in this doubly transgressive send-up of the discourses surrounding immigration in the current presidential debate.

With Pavlovian precision, much of the political center has moved to the fringes on immigration. During boom years, nobody cares, but scapegoating the poor inches up quite predictably with each downward stumble of the national economy. Political survival in down times requires candidates to pretend that immigrants -- documented and otherwise -- did not contribute to prosperity in previous times.

For a candidate who is also a venture capitalist at the very top of the economy, this is especially challenging. His rhetoric needs to be insistent and fiery enough to overshadow what he has gained from migrants, which has come in several forms. In addition to the generalized benefits we all gain from migrants -- legal and otherwise -- Romney derives several specific benefits as a major player in Dunkin' Donuts coffee. Commodity coffee is often exported at prices very close to -- or even below -- the cost of production. In conventional trading systems, individual farmers are likely to receive far less than the export price, driving migration from coffeelands, first into nearby cities and later into other countries. A majority of Nicaraguan families, for example, now have at least one family member working abroad, and many of these are people who would work in coffee if they could earn enough to survive.

During the most recent candidate's debate, Gov. Rick Perry called out Romney for his previous employment of undocumented workers through a landscaping contractor. His denial was interesting in several ways. First, he said that he personally had not directly hired anybody. This is both specifically true in the case of hiring a landscaping contractor and generally true among the truly powerful, whose hiring practices are often buffered by layers of contracts and subcontracts. This means that not only can Romney deny responsibility for the legal status of his gardener, but he can also deny it for hourly workers at Dunkin' Donuts, who are hired by franchise owners who under enormous pressure from their "investors" at Bain Capital.

Romney's reply to Rick Perry centered on the claim that he "fired" the landscaping company as soon as he found out about its hiring of undocumented workers. In describing the termination of the contract, he admitted mentioning his own status as a political candidate to the contractor. He failed to mention, however, that he did not terminate the relationship the first time he learned of the hiring, but only after the second Boston Globe story on the subject, a full year after the first!

I conclude this post with a comment on the Wasserman cartoon itself, and my use of the word "transgressive," which I usually use to refer to artistic license that is taken at the expense of societal norms that I think deserve to be challenged. In this case, however, the art transgressed against two of my own norms. First, as someone who grew up on the spatial and temporal edges of the Old South, I find so-called "lawn jockeys" a disturbing symbol of white privilege. Second, the word "illegal" is problematic even when used as an adjective, and doubly so when used as a noun to refer to a person. It is not generally applied to those who commit other crimes, so that a murder is illegal, but the murderer is not, so why does it apply to those who cross borders, overstay visas, or violate the terms of visas?

Posted by James Hayes-Bohanan at 11:01 PM