Quick: Which of these people is the president of Brazil? 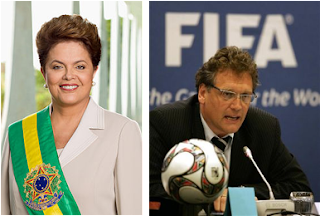 On the left -- wearing the sash of the presidency -- is Dilma Youseff. On the right is Jérôme Valcke. Youseff's claim to office is an election by the people of Brazil, who number nearly 200 million. Valcke's claim to office is that he is general secretary of FIFA, the governing body of soccer (or football as it is generally known).

The confusion arises around the question of beer, the sale of which has been banned in Brazilian stadiums since 2003. As a sovereign nation, Brazil as a whole -- and many of its states and cities on an individual basis -- decided to impose the ban as a way to reduce hooliganism.

Rather than comply with the laws of its host, FIFA is directing Brazil to change its laws.. Perhaps Valcke failed to get the memo about Brazil being a country -- and a growing and substantial country at that -- while FIFA is simply a sports league. Perhaps he was too busy worrying about pervasive corruption in his own organization to make note of the distinction.

In any case, the Budweiser-sponsored official was quite clear in his directive, according to the BBC:

"Alcoholic drinks are part of the Fifa World Cup, so we're going to have them. Excuse me if I sound a bit arrogant but that's something we won't negotiate," he said.
"The fact that we have the right to sell beer has to be a part of the law."

Note that he does not cite any kind of prior agreement; rather, he just asserts that FIFA expectations trump Brazilian law. It will be interesting to see whether this view prevails.

Posted by James Hayes-Bohanan at 11:46 PM